Under Industrial Policy, keeping in view the priorities of the country and its economic development, the roles of the public and private sectors are clearly decided.

Under the New Industrial Policy, the industries have been freed to a large extent from the licenses and other controls. In order to encourage modernisation, stress has been laid upon the use of latest technology.

A great reduction has been effected in the role of the public sector.  Efforts have been made to encourage foreign investment. Investment decision by companies has been facilitated by ending restrictions imposed by the MRTP Act. Similarly, Foreign Exchange Regulation Act (FERA) has been replaced with Foreign Exchange Management Act (FEMA).

Some important points of the New Industrial Policy are as follows:

Before the advent of the New Industrial Policy, the Indian industries were operating under strict licensing system. Now, most industries have been freed from licensing and other restrictions.

The use of latest technology has been given prominence in the New Industrial Policy. Therefore, foreign technological collaboration has been allowed.

A policy of not expanding unprofitable industrial units in the public sector has been adopted. Apart from this, the government is following the course of disinvestment in such public sector undertaking.

Monopolies and Restrictive Trade Practices Act has been done away with. Now the companies do not need to seek government permission to issue shares, extend their area of operation and establish a new unit. 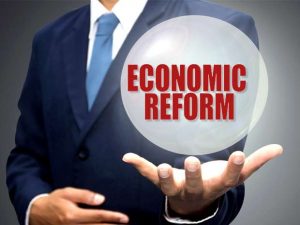 Trade policy means the policy through which the foreign trade is controlled and regulated. As a result of liberalisation, trade policy has undergone tremendous changes. Especially the foreign trade has been freed from the unnecessary controls.  The age-old restrictions have been eliminated at one go. Some of the chief characteristics of the New Trade Policy are as follows:

The policy of the government connected with the income and expenditure is called fiscal policy. The greatest problem confronting the Indian government is excessive fiscal deficit. In 1990-91, the fiscal deficit was 8% of the GDP.

In order to handle the problem of fiscal deficit, basic changes were made in the tax system. The following are the major steps taken in this direction:

Monetary policy is a sort of control policy through which the central bank controls the supply of money with a view to achieving the objectives of the general economic policy. Reforms in this policy are called monetary reforms. The major points with regard to the monetary reforms are given below:

Statutory Liquidity Ratio (SLR) has been lowered. (A commercial bank has to maintain a definite percentage of liquid funds in relation to its net demand and time liabilities. This is called SLR. In liquid funds, cash investment in permitted securities and balance in current account with nationalised banks are included.)

The market in which securities are sold and bought is known as the capital market. The reforms connected with it are known as capital market reforms. This market is the pivot of the economy of a country. The government has taken the following steps for the development of this market:

Cash Compensatory Support (CCS) which was earlier given as export subsidy has been stopped. CCS can be understood with the help of an example.  If an exporter wants to import some raw material which is available abroad for 100, but the same material is available in India for 120 and the governments wants the raw material to be purchased by the exporter from India itself for the protection of indigenous industries, the government is ready to pay the difference of 20 to the exporter in the form of subsidy.  The payment of 20 will be considered as CCS. In addition to this, the CCS has been reduced in case of fertilizers and petro products.