In India, government expenditure – as per the provision in the Constitution – is divided into revenue expenditure and capital expenditure. However, the adoption of economic planning shifted emphasize on the division of expenditure into Plan and Non-Plan. The share of Non-Plan expenditure has remained close to 70% and that of Plan at 30% all these years. The Planning Commission, in the 11th Plan (2007-12) document prepared in 2007, had proposed abolition of this “illogical and dysfunctional” distinction citing several issues (mentioned later in the article). A high-level committee on Efficient Management of Public Expenditure, was then, constituted by the Planning Commission which recommended that the usual distinction made in the government budget between Plan expenditure and Non-Plan expenditure be done away with.

As the free market principles were accepted, role of government in Indian economy changed from being a controller to regulator. Government is the one which decides about the various factors controlling our economy and decides the rules and regulations keeping in mind the welfare of the public. Apart from this the government undertakes expenditure on economic and social sector. Increased priority to development expenditure results in better human and physical asset formation which will further increase growth prospects of the state. It also steps in for production of goods or services in areas which are either economically unviable for private enterprise, natural monopolies requiring heavy capital investments or are restricted from private industry participation.

Governments (Central, State and Local governments) incur expenditures to satisfy the collective social needs of the people, to correct market distortions as well as to regulate private activities hazardous to the society. All kinds of government consumption and investment are considered as Government spending. Though, it can be sub-categorized into government final consumption expenditure (acquisition of goods and services by the government for current use to directly satisfy individual or collective needs of the society), gross fixed capital formation (acquirement of goods and services for future benefits such as infrastructure investment, research spending) and transfer payments. 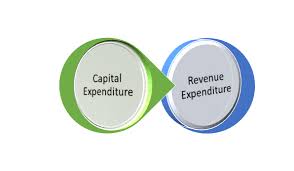 Thus, through public expenditure, the government influences directly or indirectly production, consumption and distribution of the nation, helping towards the economic and social wellbeing of the society .

India has adopted economic planning (through Five Year Plans) as a strategy for economic development. The expenditure incurred on the items relating to five year plans is termed as Plan expenditure and are estimated after discussions between each of the ministries concerned and the Planning Commission.

They are spent on productive asset creation through Centrally sponsored programmes and flagship schemes. Non-Plan expenditure in social sectors, a very large part of this category of expenditure in the states is meant for the salaries of staff working for the government.

Adoption of various policies relating to revenue and expenditure results in an efficient and sustainable reduction in the fiscal deficit. A government in need to cut the fiscal deficit may at times find it difficult or impossible to raise the level of revenue in the short run, could be because of the economic downturn, policy hindrance etc. Increasing the quality of public spending is one of the alternatives at disposal to the authority which can release resources to reduce the deficit. Failing to do so, the government could fall back on internal (via market borrowing) and/or external borrowings. However, higher debt leads to higher interest payments putting further pressure on the non-developmental expenditure and fiscal deficit, raising concerns about fiscal sustainability.

Recently, the RBI governor too has underlined the need for returning to the path of fiscal consolidation to contain borrowing requirements. And the finance minister came out with the budget statement that the high fiscal deficit was not sustainable and assured to scale down fiscal deficit at 4.8% of GDP in 2013-14.

The Union Budget 2018 unveiled by finance minister Arun Jaitley outlined various allocations for government expenditure. As expected, government spending focused primarily on rural development and overall infrastructure development. The expenditure budget has been increased marginally for the 2018-19 period owing to higher allocations in various sectors. All expenditure including allocation for central projects and establishment expenditure has been raised from the previous year.

Overall expenditure budget The overall government expenditure in the Union Budget 2018 (2018-19) was estimated to be around Rs.24.42 lakh crore. When discussing the fiscal situation of 2017-18, the finance minister revised the total expenditure estimate to Rs.21.57 lakh crore. This represents a marginal increase from the budget estimate of Rs.21.47 lakh crore. He also noted that the central government would receive GST revenues for 11 months rather than 12 months in the 2017-18 period. This fiscal effect has been offset by the higher revenues generated from direct tax and disinvestment receipts. Also, fiscal deficit for 2018-19 has been estimated to be 3.3%.

Fiscal deficit refers to difference between the government’s revenues and expenditure. In the Union Budget 2017, the government set a fiscal deficit target of 3.2% for the current fiscal year. However, analysts across the country expect that the finance minister may announce a slippage from the fiscal deficit target mainly because of declining revenues. While capital expenditure has remained under control for the last year, lower revenues that followed the GST rollout in mid-2017 could very well be the reason behind this slippage.

Compared to Union Budget 2016, the government has increased spending in various sectors in last year’s budget. For instance, the defense sector received an additional Rs.14,000 crore and the education sector received an additional Rs.4,500 crore in the previous budget. In the previous budget, total expenditure through budget stood at Rs.21.47 lakh crore. Of this, central spending totaled more an Rs.17 lakh crore. Expenditure budget for last year increased significantly mainly because of government spending in infrastructure and other central schemes.