Vallabhacharya (1479–1531 CE), also known as Vallabha, was a devotional philosopher, who founded the Krishna-centered Pushti sect of Vaishnavism in the Braj region of India, and the philosophy of Shuddha advaita.

Vallabha was born in a Telugu Brahmin family that had been living in Varanasi, who escaped to the Champaran of Chhattisgarh state while expecting Vallabha, during the turbulent times of Hindu-Muslim conflicts in the late 15th century.Vallabha studied the Vedas and the Upanishads as a child, then travelled throughout the Indian subcontinent over 20 years. He became one of the important leaders of the devotional Bhakti movement. The hagiographies written by his followers, just like those for other Bhakti leaders, claim that he won many philosophical debates against the followers of Ramanuja, Madhvacharya and others, had visions and miracles.

He is the Acharya and Guru within the Pushti sub-tradition, which he founded after his own interpretation of the Vedanta philosophy. Vallabha rejected asceticism and monastic life, suggested that through loving devotion to God Krishna, any householder could achieve salvation – an idea that became influential in western Uttar Pradesh, Rajasthan and Madhya Pradesh.He is associated with Vishnuswami, and is the prominent Acharya of Rudra Sampradaya out of the four Vaishnava Sampradayas 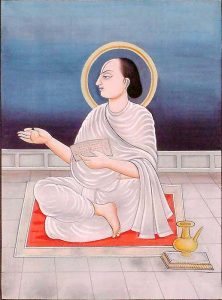 He authored many texts including the Anubhashya (a commentary on Brahm Sutra), Shodash Granth or sixteen ‘stotras’ (tracts) and several commentaries on the Bhagavata Purana. Vallabha’s writings and kirtan compositions focus on baby Krishna and his childhood pranks with Yashoda (unconditional motherly love), as well as a youthful Krishna in relationship (erotic mysticism) with cowherding women as the many lilas (pastimes) of Krishna, Krishna’s protection of the good (divine grace) and his victory over demons and evils, all with allegory and symbolism. His legacy is best preserved in the Braj region, and particularly at Nathdwara in Mewar region of India – an important Krishna pilgrimage center.

Guru Ghasi Das (1756–1836 CE) was an advocate of the Satnami sect of Hinduism in the early 19th century.  Ghasi Das was born on December 18, 1756 in Girodpuri, District – Balodabazar. Guru Ghasidas was the son of Mahngu Das and Amrotin Devi. Ghasidas preached Satnam particularly for the people of Chhattisgarh. After Ghasi Das, his teachings were carried on by his son, Balakdas. Guru Ghasidas was the founder of the Satnami community in state of Chhattisgarh. During his lifetime, the political atmosphere in India was one of exploitation. Ghasidas experienced the evils of the caste system at an early age, which helped him to understand the social dynamics in a caste-ridden society and reject social inequality. To find solutions, he travelled extensively across Chhattisgarh.  Saint Guru Ghasidas established Satnami community in Chhattisgarh, India based on “Satnam” (meaning “Truth”) and equality. The Guru’s teachings and philosophy is similar to Buddhism. Guru Ghasidas created a symbol of truth called “jaitkhambh” – a white painted log of wood, with a white flag on the top. The structure indicates a white man who follows the truth “satnam” is always steadfast and is the pillar of truth (satya ka stambh). The white flag indicates peace.

Guru Balakdas (1801 Bhandar, Raipur district, Central Provinces – 1860 CE Aurabandha was son of the founder of the Chhattisgarh Satnami sect of Hinduism, Guru Ghasi Das. Guru Balakdas’ activities aroused the hostility of higher-caste Hindus, and he was murdered by Rajput attackers at a rest-house in Aurabandha (near by Mungeli district of Chhattisgarh) while travelling to Raipur in 1860.