The tribal areas of Chhattisgarh though sparsely populated continue to receive special attention of the State Government primarily on account of their strategic location and comparative backwardness. The Tribal Sub Plan was started in 1974-75 in the State and entire tribal population was brought under the ambit of the Tribal Sub Plan by 1987-88. The strategy of Tribe sub-plan envisages channelizing an adequate flow of funds are benefits to ST’s from all sectors of development through the Annual Plans of States / UT and the Central Ministries atleast in proportion to their population, both in financial and physical terms.

The mains objectives of Tribal Sub-Plan (TSP) are : 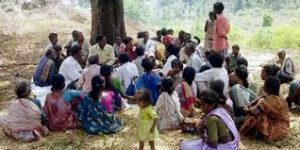 (i) Sub statical reduction in poverty and unemployment of ST’s.

(ii) Creation of productive assets in their favour and providing them with livelihood opportunities on a sustainable basis.

(iv) Provisions of social, physical and financial security to them against all types of exploitation and oppression.

The concept of incorporating Tribal Sub-Plan in the Annual Plan of the State was first introduced by the Planning Commission, Government of India on the eve of 5th Five-Year Plan. Comprehensive development of Tribal areas focusing particularly on the Welfare of individual tribal family was the main objective of the tribal sub-plan. The procedure followed in the State till 1995- 96 for the formulation of Tribal Sub-Plan of the State was briefly that State Planning department used to allocate plan outlays to different sectoral departments in consultation with Tribal Development Department.

The departments concerned then used to curve out outlays for Tribal Sub-Plan as per their own discretion and priorities, and to decide as to which of the schemes, programmes and development works are to be taken-up from the funds provided under Tribal Sub-Plan. There was, therefore, a feeling that the Tribal SubPlan was merely agglomeration of the State Plan schemes taken-up in the Tribal Area and emphasis given mainly arithmetical figures rather than the scheme really benefiting tribal families. There was no attempt to formulate the sub-plan in consultation with the Integrated Tribal Development Project level officers.

A Plan is as good as implemented, monitoring is continued to be undertaken through reports, review meetings and field visits. Towards this end, after the Sub-Plan gets reflected in the State budget in a single Consolidated Demand. a document, containing the complete set of schemes and the ITDP-wise Sectoral/Schemewise/SOE-wise outlays and list of works is prepared by the Tribal Development Department and circulated to all the departments and their field agencies simultaneously for timely implementation of schemes. The Head of Departments conveys the budget allocation to their respective Drawing & Disbursing Officers. All this is done by the 1st week of April so that expenditure is incurred right from the beginning of the financial year and targeted works could be completed within limited working season in the tribal areas. A stock of performance of the tribal sub-plan programme is taken quarterly at the Project Level by the Project Advisory Committee and by the Commissioner-cum- Addl. Chief Secretary (TD)/ AdditionalCommissioner(T.D.)/ Deputy Director while on tour to these areas. At the State level, the Chief Secretary holds quarterly review meetings with the departments who, at their own level, also do such exercise like-wise. A mid-year review is also undertaken to affect diversion in outlays within and without the earmarked sectors.

This is a Central Sector Scholarship Scheme for ST students introduced from the academic year 2007-08 with the objective of encouraging meritorious ST students for pursing studies at Degree and Post Graduate level in any of the Institutes identified by the Ministry of Tribal Affairs for the purpose.

In the context of the trend of establishing quality residential schools for the promotion of education in all areas and habitations in the country, the Eklavya Model Residential Schools (EMRS) for ST students take their place among the Jawahar Navodaya Vidyalayas, the Kasturba Gandhi Balika Vidyalayas and the Kendriya Vidyalayas. Eklavya Model Residential Schools (EMRS) are set up in States/UTs with grants under Article 275(1) of the Constitution of India.

The Government of India, Ministry of Tribal Affairs has launched Vanbandhu Kalyan Yojana (VKY) for welfare of Tribals. VKY aims at creating enabling environment for need based and outcome oriented holistic development of the tribal people. This process envisages to ensure that all the intended benefits of goods and services under various programmes/schemes of Central as well as State Governments actually reach the target groups by convergence of resources through appropriate institutional mechanism.

There are about 350 Blocks in the Schedule V areas where population to STs compared to total population of the Block is 50% or above. Despite several interventions in the past, these Blocks are still reeling under various facets of deprivation in so far as Human Development Indices are concerned. Through VKY, it is envisaged to develop these Blocks as model Blocks over the period of next five years with qualitative and visible infrastructural facilities.

Scheme of Marketing Development of Tribal Products or Produce

The Tribal Cooperative Marketing Development Federation of India Limited (TRIFED) was established in August 1987 by the then Ministry of Welfare, Government ofIndia , under the Multi State Cooperative Societies Act 1984 (which has now been replaced by the Multi-State Cooperative Societies Act, 2002) . TRIFED was established with the basic mandate of bringing about the socio-economic development of tribals of the country by institutionalizing the trade of Minor Forest Produce (MFP) and Surplus Agriculture Produce (SAP) collected/cultivated by them – because tribals are heavily dependent on these natural products for their livelihood. But in many cases they did not use to get remunerative prices due to middle-men and unscrupulous traders exploiting the naiveté of Tribals.