Society is a collectivity of groups and individuals. It exists for the welfare and advancement of the whole. The mutuality, on which it depends, is possible to sustain by adjustment of varied and contradictory interests. The structure pattern continues to exist because of its inbuilt mechanism and sanction system.

Social control which implies the social intercourse is regulated in accordance with established and recognised standards, is comprehensive, omnipotent and effective to stimulate order, discipline and mutuality; and to discourage, and if need be, to punish the deviance.

The aim of social order, Parsons has well said, is “nipping deviant tendencies in the bud”. If that be not done, social order would cease to exist; the law of the brute would prevail. The world would be that ‘brutish’ and ‘nasty’ state will prevail in society. Just the opposite is the process and influence that regulated social action.

social control is nothing but control of the society over individuals. In order to maintain the organisation and the order of the society, man has to be kept under some sort of control. This control is necessary in order to have desired behaviour from the individual and enable him to develop social qualities.

The following are the agencies of social control:

Custom denotes habit not in the sense an individual acquires a habit. It is a social habit in the sense that once the members of a group form a habit, it becomes a recognized custom only if it is backed by social sanctions. While Ginsberg states that custom gets so ingrained in life that we follow it almost instinctively, McIver and Page stress the inter-relationship of habit and custom.

An individual habit like taking tea or coffee with morning breakfast is not a custom; when a habit becomes socially expressed and when it carries social and external sanction, it becomes a custom. For example, holding celebrations and festivals are a custom but having a get-together of friends on holidays is a habit. 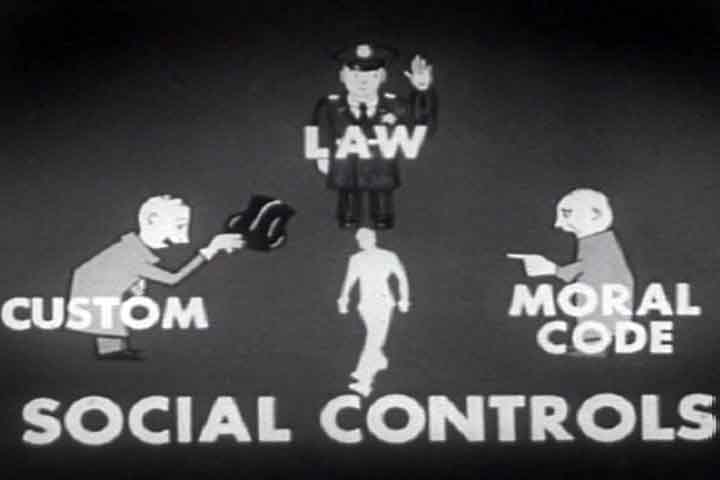 According to Sumner, man has obtained from his ancestors certain proclivities, skills and habits by way of heritage, which enable him to solve several of his problems, like those relating to production of food or food habits, sex relationships I and his aesthetic sensibilities. These become the ‘folkways’ of his society for, in formation of these unwritten rules, deliberation by exchange of thoughts between different elements of the society took a very important role.

Law as an agency of social control is a much later development than custom, folkways or folkmores; it is more recent and more liberal than religious precepts. Law may take the shape of unwritten conventions or codified commands made by a recognized authority and, in either case, there must be a well-defined machinery for enforcing the provisions.

In order to understand religion and religious precepts as an agency of social control, we must first try to appreciate the meaning of the word. The word ‘religion’ appears to have been taken from a Latin root which stands for a ‘bond’ The Indian word Dharma standing for religion emphasizes the quality of ‘holding together’. Hence, religion does not merely connote a belief in God, or a relationship between man and his Creator; it appears that the quality of religious practices that hold society together has a greater significance for the word.

In a sense, education is an informal process of acquiring knowledge throughout one’s life and such process is never completed until death. According to the Latin root educare meaning to bring up and educere, which stands for bringing forth, the word ‘education’ would fit in with the idea of all the knowledge earned by ac individual for facing life as a whole with the sense of confidence of preparedness.

Social change, is the alteration of mechanisms within the social structure, characterized by changes in cultural symbols, rules of behaviour, social organizations, or value systems.

Throughout the historical development of their discipline, sociologists have borrowed models of social change from other academic fields. In the late 19th century, when evolution became the predominant model for understanding biological change, ideas of social change took on an evolutionary cast, and, though other models have refined modern notions of social change, evolution persists as an underlying principle.

Other sociological models created analogies between social change and the West’s technological progress. In the mid-20th century, anthropologists borrowed from the linguistic theory of structuralism to elaborate an approach to social change called structural functionalism. This theory postulated the existence of certain basic institutions (including kinship relations and division of labour) that determine social behaviour. Because of their interrelated nature, a change in one institution will affect other institutions.

social change occurs in culture and cultural evolution is the result of the following is the process of social change which includes:

Linton says that “an invention is a new application of knowledge”. When a thing which is already exists in a culture comes to front and appear before the masses, is invention in social change. Invention occurs due to the following three factors.

An invention required mental ability of an individual in a society. Larger the population, greater would be the number of talented people. So, mental ability is a source for social change in society.

A demand of the people for anything which is in scarcity results in an invention, which leads to social change. Greater the demand of people for material object, faster would be the process of invention.

Last but not the least adjustment is the last factor in the process of social change. After invention, accumulation and diffusion of cultural elements the adjustment of an individual takes place in that culture. All the cultural elements are interrelated with one another but when a material change occurs in a culture it bring slow change in material culture. But with the passage of time the space fills and the adjustment of new elements takes place in that culture. So, the invention of new element becomes a part of the culture as a result of adjustment process of social change.

Certain geographic changes sometimes produce great social change. Climate, storms, social erosion, earthquakes, floods, droughts etc., definitely affect social life and induce social change. Human life is closely bound up with the geographical conditions of the earth.  Human history is full of examples that flourishing civilisations fell prey to natural calamities. The distribution of population over various regions, the variations in the population densities, the agricultural production, flora and fauna, the joys and hardships—all indicate a change when a change in the physical environment occurs.

The composition of population depends upon variables like age, sex, marital status, literacy etc. Changes in demographic structure, which may be caused by changes in mortality rates, will produce changes in the ratio of breadwinners to dependents.

It is an established fact that there is an intimate connection between our beliefs and social institutions, our values and social relationships. Values, beliefs, ideas, institutions are the basic elements of a culture. Certainly, all cultural changes involve social change.  Social and the cultural aspects are closely interwoven. Thus, any change in the culture (ideas, values, beliefs etc.) brings a corresponding change in the whole social order. Social institutions cannot live on life shells within which life is extinct.

Among the cultural factors affecting social change in modern times, the development of science and secularisation of thought have contributed a lot to the development of the critical and innovative character of the modern outlook. We no longer follow many customs or habits merely because they have the age-old authority of tradition. On the contrary, our ways of life have increasingly become on the basis of rationality.