Decision making is the process of identifying and selecting a course of action to solve a specific problem.

Decision making involves the selection of a course of action from among two or more possible alternatives in order to arrive at a solution for a given problem. 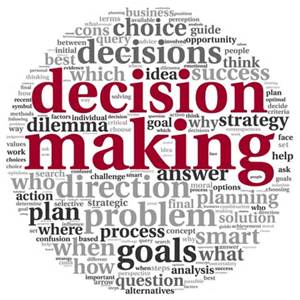 Decision-making has become a complex problem. A number of techniques are available which help in taking decisions. The nature and significance of decision will determine the type of technique to be used. The selection of appropriate technique depends upon the judgment of decision maker. The decision making techniques can be classified into traditional and modern.

The important techniques of decision-making are as follows:

A relationship is established between a superior and a subordinate. This relationship comes out of organizational structure. Persons at different organizational structures are assigned work to be done by them. For taking up this work, managers need authority to take decisions. The authority to take decisions needs proper information back up. All managers or decision making centres are linked to information system for supplying information when needed.

Non-programmed decisions are strategic in nature and require separate analysis and interpretation. The quantitative and scientific techniques help in taking such complex and unique problems. A manager does not entirely depend upon his knowledge, ability and judgment but these skills are associated with scientific methods for achieving good results. The use of quantitative techniques ensures high degree of precision and accuracy.

This technique is used to determine the best use of limited resources for achieving a given objective. It is based on the assumption that there exists a linear relationship between variables and the limits of variations could be ascertained. It is particularly helpful where input data can be quantified and objectives are subject to definite measurement. Linear programming is applicable in such problem areas as production planning, transportation, warehouse location and utilization of production and warehouse facilities at an overall minimum cost.

This statistical tool is based on the assumption that certain things are likely to happen in future in a manner which can be predicted to some extent by assigning various probabilities. In this technique pay-off matrices and decision trees are constructed to represent variables. The decision tree is an extension of pay-off matrices and helps the managers in assigning financial results to various available recourses of action, modifying these result probabilities and comparing them for selecting an appropriate course of action.

Game theory helps in making decisions under competitive situations. It was basically developed for use in wars so that actions of the army can be decided in the light of actions taken by opposite army. The term “game’ represents a conflict between two or more parties. The game is described by set rules. These rules clearly specify what each person, called player, is required to do under all possible set of circumstances. A person has to consider a rational course of action by not only by considering his actions but also by considering the actions of other persons. All players act intelligently and rationally and are well informed about the decision situation except the opponent’s actions in a particular period. For each player the outcome may represent a gain or loss or a draw.

An effort is made to obtain balance between the costs associated with waiting time and idle time and queuing theory helps in achieving this balance. This theory helps in arriving at a decision about the provision of optimum facilities. It should be noted that this theory does not directly solve the problem of minimizing the total waiting and service costs but it provides the management with information necessary to take relevant decisions for the purpose.

Network technique is used for preparing and controlling the project activities. Project Evaluation and Review Technique (PERT) and Critical Path Method (CPM) are used for planning, monitoring and implementing time bound projects. These techniques help managers in deciding the logical sequence in which various activities will be performed. By applying these techniques large and complex projects can be executive within the stipulated time and cost.

Some techniques followed at present are discussed as follows:

This technique is based on the assumption that in a complex and changing business situation strategic problems cannot be solved by applying rational and scientific techniques. In an uncertain environment and conflicting interests the problem will have to be fragmented into small components for taking a realistic view.

By splitting the problem into small parts and analyzing each part separately, a decision can be reached. It is a trial and error method based on rules of thumb. Heuristic techniques are developed by managers to deal with various components at different stages. Computers can easily be used for solving complex and strategic problems. This technique is a more refined way of trial and error method because it is developed by applying analytical and creative approach.

It is method of applying democratic means for decision making process. In traditional managerial techniques, decisions are taken at top levels of management and these are intimated to lower levels for implementation. In participative decision-making, employees at various levels are involved in making various decisions. When subordinates are made a part of decision making, it not only helps in getting the advantage of their practical experience but also helps in implementing decisions properly. The subordinate staff feels motivated and encouraged and takes active interest in the working.