The power to govern should be distributed between the Parliament, the Executive and the Judiciary to avoid one group having all the power. Each group should work within defined areas of responsibility so that each keeps a check on the actions of the others.

The principle of separation of powers deals with the mutual relations among the three organs of the government, namely legislature, executive and judiciary. The doctrine of the separation of powers tries to bring exclusiveness in the functioning of the three organs and hence a strict demarcation of power is the aim sought to be achieved by this principle. This doctrine signifies the fact that one person or body of persons should not exercise all the three powers of the government.Its based on checks and balances of government functions.

Main features of separation of power are:-

India follows constitutional democracy which offers a clear separation of powers. The judiciary branch is fairly independent of the other two branches with the power to interpret the constitution. Parliament has the legislative powers. Executive powers are vested with the President who is advised by the Union Council of Ministers headed by the Prime Minister. The constitution of India vested the duty of protecting, preserving and defending the constitution with the President as common head of the executive, parliament, armed forces, etc. not only for the union 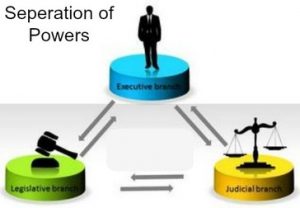 government but also the various state governments in a federal structure. All three branches have “checks and balances” over each other to maintain the balance of power and not to exceed the constitutional limits.