Working principle and use of generator

Generator is a machine that converts mechanical energy into electrical energy. It works based on principle of faraday law of electromagnetic induction. The faradays law states that whenever a conductor is placed in a varying magnetic field, EMF is induced and this induced EMF is equal to the rate of change of flux linkages. This EMF can be generated when there is either relative space or relative time variation between the conductor and magnetic field.

An electric conductor moves through a magnetic field, the magnetism will interface with the electrons in the conductor to induce a flow of electrical current inside it.

Generators are basically coils of electric conductors, normally copper wire, that are tightly wound onto a metal core and are mounted to turn around inside an exhibit of large magnets. An electric conductor moves through a magnetic field, the magnetism will interface with the electrons in the conductor to induce a flow of electrical current inside it.

The conductor coil and its core are called the armature, connecting the armature to the shaft of a mechanical power source, for example an motor, the copper conductor can turn at exceptionally increased speed over the magnetic field. 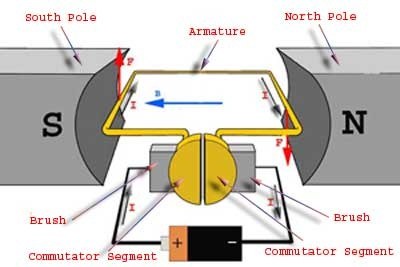 The point when the generator armature first starts to turn, then there is a weak magnetic field in the iron pole shoes. As the armature turns, it starts to raise voltage. Some of this voltage is making on the field windings through the generator regulator. This impressed voltage builds up stronger winding current, raises the strength of the magnetic field. The expanded field produces more voltage in the armature. This, in turn, make more current in the field windings, with a resultant higher armature voltage. At this time the signs of the shoes depended on the direction of flow of current in the field winding. The opposite signs will give current to flow in wrong direction.

The generators are classified into types.

These are also called as alternators. It is the most important means of producing electrical power in many of the places since now days all the consumers are using AC. It works based on principle of the electromagnetic induction. These are of two types one is induction generator and other one is synchronous generator. The induction generator requires no separate DC excitation, regulator controls, frequency control or governor. This concept takes place when conductor coils turn in a magnetic field actuating a current and a voltage. The generators should run at a consistent speed to convey a stable AC voltage, even no load is accessible.

Synchronous generators are large size generators mainly used in power plants. These may be rotating field type or rotating armature type. In rotating armature type, armature is at rotor and field is at stator. Rotor armature current is taken through slip rings and brushes. These are limited due to high wind losses. These are used for low power output applications. Rotating field type of alternator is widely used because of high power generation capability and absence of slip rings and brushes.

DC generator is typically found in off-grid applications. These generators give a seamless power supply directly into electric storage devices and DC power grids without novel equipment. The stored power is carries to loads through dc-ac converters. The DC generators could be controlled back to an unmoving speed as batteries tend to be stimulating to recover considerably more fuel.

D.C Generators are classified according to the way their magnetic field is developed in the stator of the machine.