The area of triangles can be found by using the following formula:

Find the area for the following figure:

Condition of collinearity of three points

Collinear points: Three points A, B and C are said to be collinear if they lie on the same straight line.

There points A, B and C will be collinear if AB + BC = AC as is clear from the adjoining figure.

In general, three points A, B and C are collinear if the sum of the lengths of any two line segments among AB, BC and CA is equal to the length of the remaining line segment, that is,

There points A, B and C are collinear if:

In Sexagesimal System, an angle is measured in degrees, minutes and seconds.

In Centesimal System, an angle is measured in grades, minutes and seconds. In this system, a right angle is divided into 100.

In this System, an angle is measured in radians. In higher mathematics angles are usually measured in circular system. In this system a radian is considered as the unit for the measurement of angles.

Radian: A radian is an angle subtended at the center of a circle by an arc whose length is equal to the radius. 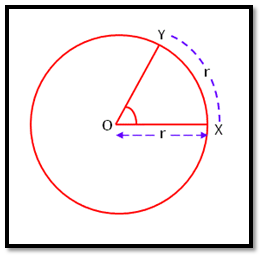 Now, take an arc XY of the circle such that arc XY = r and join OY. By definition, ∠XOY = one radian. One radian is written as 1c, 2 radians as 2c and in general, k radians as kc.

Circular (radian) measure of an angle: