India is a vast country and has a long history. Its society has evolved through the ages and has also been affected by foreign influences giving it extreme diversity and made unity amidst diversity a characteristic of the Indian society. However, to understand the process, we need to understand the meaning of diversity, unity and pluralism as well as their relevance to the Indian society.

Indian society is institutionalized in nature in the form of well developed systems like Family, Marriage, Gotra and Caste System.

Indian society is a multi-class due to several classes exists in India. This classification is based ones birth as well as his achievements.

Indian society is multi-ethnic in nature due to various racial groups coexists in India. Almost all the races of the world can be seen in India.

Although Hinduism is the major religion in India, there exist various other religions such as Islam, Buddhism, Jainism, Sikhism, Christianity, Bahai and Parsi etc.

Unity means integration. It is a social psychological condition. It connotes a sense of one-ness, a sense of we-ness. It stands for the bonds, which hold the members of a society together. There is a difference between unity and uniformity. Uniformity presupposes similarity, unity does not. Unity is of two types, first which may be born out of uniformity, and second which may arise despite differences. French sociologist has termed these two types as mechanical and organic solidarity respectively.

Inspite of diversities, Indian community shares certain bonds of unity. The first bond of unity of India is found in its geo-political integration. India is known for its geographical unity marked by the Himalayas in the north and the oceans on the other sides. Politically India is now a sovereign state. The same constitution and same parliament govern every part of it. We share the same political culture marked by the norms of democracy and secularism. The geo-political unity of India was always visualized by our seers and rulers. The expressions of this consciousness of the geo-political unity of India are found in Rig-Veda, in Sanskrit literature, in the edicts of Asoka, in Buddhist 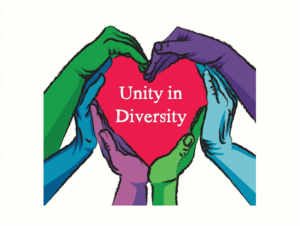 monuments and in various other sources. The ideal of geo-political unity of India is also reflected in the concepts of Bharatvarsha (the old indigenous classic name for India), Chakravarti (emperor), and Ekchhatradhipatya (under one rule).

Another source of unity of India lies in what is known as temple culture, which is reflected in the network of shrines and sacred places. From Badrinath and Kedarnath in the north to Rameshwaram in the south, Jagannath Puri in the east to Dwaraka in the west the religious shrines and holy rivers are spread throughout the length and breadth of the country. Closely related to them is the age-old culture of pilgrimage, which has always moved people to various parts of the country and fostered in them a sense of geo-cultural unity. As well as being an expression of religious sentiment, pilgrimage is also an expression of love for the motherland, a sort of mode of worship of the country. It has acted as an antithesis to the regional diversity and has played a significant part in promoting interaction and cultural affinity among the people living in different parts of India.

Indian culture, has a remarkable quality of accommodation and tolerance.  There is ample evidence of it. The first evidence of it lies in the elastic character of Hinduism, the majority religion of India. It is common knowledge that Hinduism is not a homogeneous religion, that is, a religion having one God, one Book and one Temple. Indeed, it can be best described as a federation of faiths. Polytheistic (having multiple deities) in character, it goes to the extent of accommodating village level deities and tribal faiths. For the same reason, sociologists have distinguished two broad forms of Hinduism: sanskritic and popular. Sanskritic is that which is found in the texts (religious books like Vedas, etc.) and popular is that which is found in the actual life situation of the vast masses. Robert Redfield has called these two forms as great tradition of Ramayana and Mahabharata and the little tradition of worship of the village deity. And everything passes for Hinduism. What it shows is that Hinduism has been an open religion, a receptive and absorbing religion, an encompassing religion. It is known for its quality of openness and accommodation. Another evidence of it lies in its apathy to conversion. Hinduism is not a proselytising religion. That is, it does not seek converts. Nor has it ordinarily resisted other religions to seek converts from within its fold. This quality of accommodation and tolerance has paved the way to the coexistence of several faiths in India.

Indian society was organized in such a way that various social groups were independent of each other.  One manifestation of it is found in the form of Jajmani system, i.e., a system of functional interdependence of castes. The term “jajman” refers generally to the patron or recipient of specialised services. The relations were traditionally between a food producing family and the families that supported them with goods and services. These came to be called the jajmani relations. Jajmani relations were conspicuous in village life, as they entailed ritual matters, social support as well as economic exchange. The whole of a local social order was involved (the people and their values) in such jajmani links. A patron had jajmani relations with members of a high caste (like a Brahmin priest whose services he needed for rituals). He also required the services of specialists from the lower jati to perform those necessary tasks like washing of dirty clothes, cutting of hair, cleaning the rooms and toilets, delivery of the child etc. Those associated in these interdependent relations were expected to be and were broadly supportive of each other with qualities of ready help that generally close kinsmen were expected to show.

Sociologist M.N.Srinivas has called this ‘vertical unity of castes’. The  jajmani relations usually involved multiple kinds of payment and obligations as well as multiple functions. No caste was self-sufficient. If anything, it depended for many things on other castes. In a sense, each caste was a functional group in that it rendered a specified service to other caste groups. Jajmani system is that mechanism which has formalised and regulated this functional interdependence. Furthermore, castes cut across the boundaries of religious communities. We have earlier mentioned that notions of caste are found in all the religious communities in India. In its actual practice, thus, the institution of jajmani provides for inter linkages between people of different religious groups. Thus a Hindu may be dependent for the washing of his clothes on a Muslim washerman. Similarly, a Muslim may be dependent for the stitching of his clothes on a Hindu tailor, and vice-versa.

Efforts have been made from time to time by sensitive and sensible leaders of both the communities to synthesise Hindu and Muslim traditions so as to bring the two major communities closer to each other. Akbar, for example, founded a new religion, Din-e-Ilahi, combining best of both the religions. Some bhakti saints like Kabir, Eknath and Guru Nanak, as well as some sufi saints made important contributions in forging unity among to communities. At the time of independence struggle, Mahatama Gandhi laid extreme emphasis on Hindu Muslim unity which was instrumental in India becoming a secular state and moving on the path of progress.