Diversity in religious practice is evident in the global community. Various sects, schools, denominations, and factions of religions can be found throughout the world, and being in close proximity to one another necessitates some form of dialogue between separate traditions. Expressions of religious feelings in practical life are not the monolithic. In our daily life these religious ideas are expressed within a very vast spectrum. And they change from time to time, from place to place, and even from person to person.

A universal religion is one intended to accompany, not replace, existing religions. One that might act as an “umbrella,” covering the gaps between existing religions and providing moral guidance when none seems otherwise available or suggesting alternatives when religious differences seem insurmountable. One that looks far into the future and whose focus is on guiding civilizations, nations and communities rather than individuals. One that all beings, of any or no religion, might feel worth adopting, because it complements and enhances their current thinking and beliefs. One that any and all life forms would recognize as relevant to them, be they simple cave dwellers or advanced aliens living far away in other galaxies. One that might guide moral behaviour for as long as life exists.

Swami Vivekananda preached the lesson of universal brotherhood which is the essence of all religion. Swami Vivekananda felt that religion is a necessary aspect of human life. He said, “Of all forces that have worked and are still working to mould the destiny of human race, none certainly is more potent than that, the manifestation of which we call Religion.” . Vivekananda said that food, clothing, shelter etc. can only satisfy our out-word needs of life. But even in the midst of all comfort and luxury man craves for something higher, something better. This is nothing but the man’s craving for religious upliftment which alone can give him real peace and solidarity. But as there are various religious organizations conflicts are there and everybody thinks that his or her opinion is the only perfect and acceptable view of religion which is to be followed on. So Swamiji tried to establish the inner truth of every religion and showed that though there are conflicts among different religious schools regarding the religious opinion of their own the inner spirituality is the same. Therefore if a man wants peace sincerely he must believe upon a Universal religion which will combine every religion and every man in this world simultaneously. 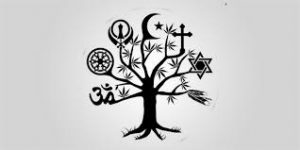 Swami Vivekananda thought that man has been searching the spiritual entities such as destiny, soul, God, etc., and this searching is being represented by different world religions competing and quarrelling to each other by declaring the absolute empire in the arena of religion and consequently by claiming the ‘exclusive right to live’. It is this kind of attitude that gives birth to hatred, war, conflict, tension and so on. Vivekananda believes in the diversity of life and calls it the law of life without which variations in thought is not possible. Keeping this in mind, he says that though throughout the ages, people of different religions have been trying to prove their “exclusive right to live”, though they have been claiming that one’s own religion is absolutely true, but none of them has been able to make success in this matter. He firmly asserts that, it is a serious mistake and quite impossible to make all people think in a single mode about spiritual things. In his own words, “…any attempt to bring all humanity to one method of thinking in spiritual things has been a failure and always will be a failure”. He emphasizes that though religions are divergent in various aspects, they are not contradictory, rather supplementary to each other. The differences amongst religions are external parts only which are due to our birth, education, surroundings and so on; but internally each religion bears the ideal which is its unique feature and soul; the soul of one may differ from that of other religion, nevertheless, they are not contradictory, both are parts of the same universal truth.