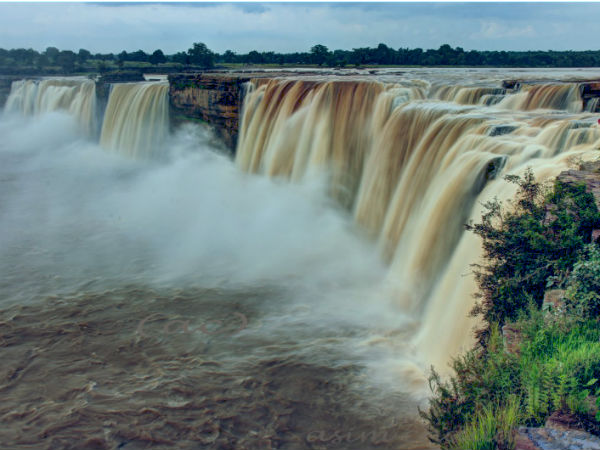 Waterfalls and caves of Bastar

The Chitrakoot Falls is located on the Indravati River. The river originates in the kalahandi region of Odisha, in the Vindhya Range of hills, flows westward and then forms a fall at Chitrakoote, enters Telangana and finally flows into the Godavari River, after traversing 390 km in the state, at Bhadrakali. The free drop of the falls is a sheer height of about 30 metres. Because of its horseshoe shape, it is compared with the Niagara Falls and is given in the sobriquet ‘the Small Niagara Falls’. During the rainy season, from July and October, rainbows are created with sun rays reflecting on mist from the waterfall.

Chitradhara waterfall is an amazing example of Bastar’s beauty. On the way to Chitrakote Falls, a small river flows through the valley of a small hill and it is the beginning of the river bed of the farmers. For this reason, there is water during the rain, but in the summer, its excellence becomes faded. In the upper part of the spring, devotees made an observation spot to see the charm of a Shiva temple and waterfall. This waterfall falls from a height of 50 feet. The next main waterfall flows down from the left side of the height of 100 feet and flows towards the hills.

The Tamda Ghumar Waterfalls is a seasonal and natural waterfall located at around 45 kilometres to the west of Jagdalpur, in Bastar district in the Indian state of Chhattisgarh. It is very close to Chitrakote and Mendri Ghumar Waterfalls.

The Mandwa Waterfalls  is a natural Waterfall located in a place called Mandwa off the NH 16 (Jagdalpur-Geedam Road), around 31 kilometres away from Jagdalpur, in Bastar district in the Indian state of Chhattisgarh. It is very close to Teerathgarh Falls and Kanger Dhara Falls.

Kanger Valley National Park has three exceptional caves, the Kailash cave is the oldest cave in this area. The cave was discovered on March 22, 1993. In the underground caves of Bastar, the Kailash Cave has the earliest limestone formations.

he known length of this cave is 1000 feet with a depth of 120 feet. Due to breathtaking limestone structures, it forms a shapes like Shivlinga.  Stalacates and stalagmites within the cave give it a replica of Kailash. These dripstone structures are also worshiped by locals.

It is a limestone cave formed on the Kanger limestone belt, situated near the bank of the River Kanger, a tributary of the Kolab River. The main tunnel of the cave is nearly 200 m long with several lateral and downward passages.

The cave is subject to frequent flooding during the monsoon season, which generally begins in the middle of June and continues until the middle of October.

Discovered in April 1995 by a forest official, Dandak Cave is a colossal, splendid cave of Kanger Valley National Park. Kanger Dhara runs in parallel to the path of this cave. This cave’s length is more than 200 m and depth is 20-25 m, with incredible rock formation at its entrance. As soon as you enter through its entrance, the empire of darkness welcomes you. The chambers of Dandak Cave have giant dripstone formations with beautiful crystal stalactites and stalagmites. During monsoon, the cave is closed.