Geographical Indication belonging to Chhattisgarh  are-

Dhokra is a non-ferrous metal casting using the lost-wax casting technique. This sort of metal casting has been used in India for over 5000 years. It was prevalent during the Indus Valley Civilisation of Harappa and Mohenjo-daro. Dhokra craft is made out of Bell metal which is an alloy of brass, nickel and Zinc that gives an antique effect to the casting products. The raw material used for casting is usually obtained from recycling scrap material. The process require great skill and precision to develop the handicraft. The Craftsmen begins by winding the slim thread of wax over the contours of clay core. It is then thickly coated with fine clay obtained from termite bills, and baked on drying, leaving a narrow vent to melt away the wax. The void created between the core and the clay layer is filled with molten metal, which is then allowed to cool down and solidify.

Examples of the lost  wax casting are found across the world, but the coiled thread technique is unique to Chhattisgarh.

Some of the finished products are Nandi Bull, Horse , Elephant, Ganesha, Candle holder, ethnic tribal designs and other diverse product rane according to market demand. About 10,000 tribal people are engaged in this art form and the practice has survived over many centuries, under the reign of many dynasties.

The tribal population living in Bastar  utilise many products they obtain from the forests and thus wood-craft is extensively practiced. The largest single wood-craft of the regnion is the Rath(chariot) for the Dusshera . Masks made of wood are worn by the tribes like Muria, Maria and Bhatra for performing rituals and also for amusement. The Muria tribe of bastar specialize in elaborate ornamentation of products made of wood. Products like Knife’s handle, sickle, husking instruments, seed funnels, wooden combs are some of the examples of the handicraft. Some tribes also worship the deities made of wood.

These are produced both in the form of proper three-Dimensional sculptures and also two dimensional scenes depicted on wooden planks.

Wrought Iron craft or Loha Shilp  is one of the most unique and oldest craft form in bastar region to create dark raw forms of the metal artifacts and figurines.The raw material used for this craft is mostly recycled scrap iron. The art originated from the ironsmith community that used to make farming and hunting implements for the tribes. Over the years, the crafts has beautifully evolved into an artistic form . The new forms in the craft reflect the realities of the changing times and the artisans response to it. These days the product consists mainly of decorative, worship, and day-to-day living accessories.Things like Lamp, candle stands, effigies of musicians, toys, figurines are typical products made out of this Art Forms of Chhattigarh.

Terracotta has found a place in the handicrafts created by Chhattisgarh. Terracotta pottery represents the rituals and the customs of tribal life in the state and symbolizes their emotions.

The other Art Forms of Chhattigarh are:

Sisal leaves are abundantly available in the reion. They are processed to produce a naturally white fibre that is soft to touch but at the same time has an incredible tensile strength. Sisal ropes remain sturdy in wet conditions and so are used extensively on ships and boats.

Cowrie Art Forms of Chhattigarh is the local name for shell-work. Shells are used to decorate many items like bags, dresses, caps etc. 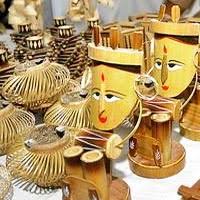 Bamboo craft is practiced in some areas in the state to make products like furniture. Narayanpur bamboo project in narayanpur is affiliated to the National Bamboo Mission.

Stone carving is done to make the deities for worshipping. Soapstone is the main material used for shaping and carving idols. Some other products of daily utilities for urban clientele is also made by the tribals of the state which is then supplied in the urban markets for the decorative  purpose at homes or during various festivals. 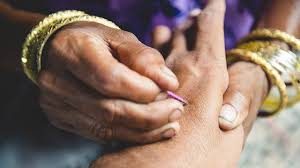 It is possibly the most pioneering art form, currently practiced by a handful of women in Jamgala in Chhattisgarh. Ladies of this village paint traditional tattoo motifs on textiles. They use natural colour obtained from the forest and combine them with acrylic paint to make it more stable on fabric.

Tumba is less known craft widely produced in the Bastar region, which originated with the widespread use of hollow gourd shells. Tribals used them as containers to store water and salfi, from which this art is inspired.

Most of these paintings has a horse as it was considered auspicious to sacrifice a horse . In most of these tribal houses one can find pithora painting. They are colourful and use natural colours.

Jewellery from Chhattisgarh is available in a variety of gold, silver, bronze and mixed metals. Ornaments made out of beads, coweries, and feathers are part of tribal costumes. Tribal men and women of Chhattisgarh wear traditional folk ornaments

The Art Forms of Chhattigarh truly represent the dexterity of its artisans. The authentic handicrafts, like any other element of culture, are really mesmerizing. If truth be told, Chhattisgarh is a place to behold the ancient as well as refined forms of art and craft.