Fairs and festivals of Chhattisgarh 2

Pola is a bull-worshipping festival celebrated by farmers mainly in the Indian state of Chhattisgarh and Maharashtra. On the day of Pola, the farmers decorate and worship their bulls. Pola falls on the day of the Pithori Amavasya (the new moon day) in the month of Shravana (usually in August).

On the day of Pola, the bulls are first given a bath, and then decorated with ornaments and shawls. Their horns are painted, and their necks are adorned with garlands of flowers. Then, they are worshipped by their owners. 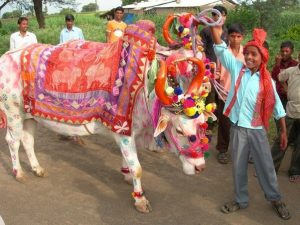 The work of decorated bulls, accompanied by the music and dancing, are carried out in the evenings. The first bullock to go out is an old bullock with a wooden frame (called makhar) tied on its horns. This bullock is made to break a rope of mango leaves stretched between two posts, and is followed by all the other cattle in the village. The order of the cattle is often indicative of the social standing of their owners in the village. In some villages, fairs are organized, where competitions take place.

Pola is the main festival of the farmers of the Maharashtra, especially the Kunbis. Puran Poli, karanji, and curry with five vegetables are the main dishes associated with the festival.

The Narayanpur Festival is celebrated in the Bastar region of Chhattisgarh. The Bastar district has a sizeable tribal population and they celebrate this festival with a lot of happiness and exuberance. The term Mela literally means fair but the Narayanpur Mela is not a fair but a festival.

On the occasion of this Chhattisgarh festival, the tribal people follow several traditions and customs. They worship the tribal deities. After worshipping their deities with a lot of devotion, they engage themselves in unrestrained merry making. The gaiety of the tribals knows no bounds. Several sessions of drinking are an integral part of the festivities.

All of us are probably well versed with the fact that collective dancing is an essential part of tribal culture. When they celebrate the Narayanpur Mela, their rhythmic dancing to the notes of fabulous drum music is simply a treat to watch. Dancing together without any restrain or reserve is a way of manifesting their joy and elation. Cheerful freewheeling marks this Chhattisgarh Festival and provides valuable insight into the ethnic way of living of these colorful people.

Time for celebrating the Narayanpur Mela in Chhattisgarh.

The Narayanpur Mela is held in the last week of February every year with a lot of merriment.

Fagun Madai festival begins 7-8 days prior to Holi and ends after a couple of days after Holi. Fagun Madai lasts for 10 days. Tribals from all around the Bastar region assemble to celebrate this colourful and vibrant festival. These tribal groups bring their local deities and establish them at the Dantewada Temple. This is followed by a number of religious activities. Special dances such as mask dance, relo dance are specially performed on this occasion. The end of this Fagun Madai fair is the grandest function of the entire function.

Koriya is a traditional fair followed till date, initiated by Ramanuj Pratap Sigh Judeo, the monarch of Koriya State.

Held a week ago Holi, a Hindu festival, the Festival that originated in the Bhils dominated Jhabua district allows you to officially elope with your lover. The devotees worship the god of dance Bahgoradav on this occasion.

In the state of Chattisgarh, there are various festivals that are celebrated by the village people. It includes Bastar Dussera, Goncha Festival, Sheorinarayan Fair, Kajari Festival, and Rajim Lochan Mahotsav. All these festivals are held annually and are celebrated with full enthusiasm and joy which unite the people together. Among all of them the most important festival celebrated in the state of Chattisgarh is the Bhagoriya Festival. This festive season is mostly celebrated one week before the main Holi festival. It is the most unique festival which is renowned for its nature in the world and is mainly celebrated between the tribes of Bhil in the territory of Jhabua in Chattisgarh. This famous festival reflects the varied Culture and tradition of India and also Chattisgarh; it also marks the spirit of tribes and village citizens who celebrate this fest with great enthusiasm and fun.

The meaning of Bhagoriya, which simply derives the phrase of elopers, it is a festival where the lovers are permitted to run far away officially during this period. The main feature of this Bhagoria festival is the gulal which is mainly used in the Holi festival and the betel leaf which plays a main role. As per the tradition of Chattisgarh, if an eloper applies gulal on his lovers forehead and if the girls responds again by applying gulal to him, then the male lovers is set free to run away. And the betel leaf is used as sign of proposal where lovers feed their own lover whom they like. According to the custom, if the betel leaf is accepted then it considered that the love between the two opposite gender is confirmed and they are allowed to spend their whole life together happily. Only after the proposal, the marriage between two lovers is solemnized. The marriage ceremony between two lovers becomes compulsory after the act of running away from the lovers and neither any one among two can refuse their eagerness to tie the knot with each other.

This process is just one of the parts of the Bhagoria festival, while there are many traditions and customs that are followed and celebrated by the tribes of Jhabua. Bhagordev is the famous deity of dancing which is worshipped by the village people during this festival in the state of Chattisgarh. The Bhil community is more into this process while celebrating this fest. This festival is the most awaited event for lovers, where during this period they can propose their love and also can seek a willingness to marry each other. However, the Bhagoria festival is celebrated with purity and no vulgarity is done that can make nuisance of love. The processes which are celebrated in this festival are supervised under the eyes of elder citizens and other respected people of Jhabua village. They mainly act as a witness for the entire sequence where the elopement process and expressing the love session is accepted. Unmarried and other citizens hail from near by villages and towns to be a part of this festival. Members who are unmarried come here with a hope to get their lover and marry happily for lifetime.

During this festival, sweets and prayers are offered to Bhagordev god, while the members of Bhil community exchange the wishes and greetings among the citizens. Once the maha puja (main prayer) is held to the god of dancing, sweets are distributed among the entire community members as Prasad (blessing of god in form of sweet). The prayers offered to god are adopted as per the celebration which includes dancing on the music of thalis and drumbeats. The music that is followed here is traditional and originally played from ancient times. The entire atmosphere is wrapped with purity and fun when the air is filled with music of flutes and shahnai, which are two main music instruments of India.

Tourists from all over the world hail here including the local and international just to be a part of the Bhagoria festival. If you are looking forward to explore the tradition and rituals of India, make sure you plan your trip to Chattisgarh in Jhabua village where this festival is held once in a year. It is celebrated in the month of March just a week prior to the famous common festival of India that is Holi.

Ganga is observed as a divine river in not only India but also amongst the most sacred rivers across the world. This truth is universal and is believed by all Indians and also by famous scholars of the world. River. It is worshiped like a Goddess and it is believed that it was the tenth day of Jyeshta bright half when she was descended on earth from heaven. The day is celebrated as Ganga Dussehra. On this day, after a lot of hard work and penance of Bhagirath, a Suryavanshi king, got success to bring down the river to earth. Since then, every year the occasion of Ganga Dussehra is celebrated by performing several rites and rituals of Ganga pooja to commemorate her.

When river Ganga incarnated on earth that occasion was obliged with rare ten vedic astrologic calculations. Jyeshtha month, Shukla Paksha (bright half), Tenth date, Wednesday, Hasta Nakshatra, Vyatipata yoga, Gar Anand Yog and Moon in Virgo and Sun in Tauras, these all ten Yogas absorb all the ten sins by merely take a bath in river Ganga on Ganga Dussehra.

Those all ten sins in which among three are organic, four verbal and other three are mental are proclaimed. Organic means sins conducted by heavenly body and these are, 1. Fetch anything from others forcibly, 2. Violence, 3. Contact with other woman. Among four types of verbal sins are, 1. Speak harsh words, 2. Tell a lie, 3. Complain for others and 4. Irrelevant rambling are included. To occupy others’ assets, desire to harm others and discussions on irrelevant topics are considered as the top most mental sins. As far as possible one should avoid involving in all these activities as these are considered as the biggest sins in our mythology but still if occur mistakenly then can demolish by just take a holy dip and perform pooja in Ganga on Ganga Dussehra.

If it is not possible to take bath in Ganga on Ganga Dussehra pray at some other river or reservoir or with pure water at home as per the convenience. After that should do recital pooja in front of idol of Ganga. The idol of Ganga is considered as Trinetr, quadrilateral, adorned with white clothes and white lotus. King Bhagirath and Himalaya should also be worshipped which is highly recommended during Ganga pooja. Lord Shiva is the prime deity to be worship during the Ganga Pooja as he is sole owner and holder of river Ganga and by grace of his mercy only sent the river on earth for the welfare of mankind. The donation of ten eatable items mainly fruits and black sesame seeds are considered most auspicious.