Some of the important Rebellions  in Chhattisgarh are:

Halba revolt is very important event in the history of bastar as it was responsible for the decline of chalukya dynasty, which in turn created circumstance that first brought the maratha then british to the region. The rebellion was initiated in 1774 by the governor of Dongar, Ajmar singh with the intention of establishing an independent kingdom Dongar. The halba tribe and halba soldiers supported him. However, the fundamental reasons for the rebellion were economic in nature. There had been a prolonged famine, which had severely affected the people who had very little cultivable land. The presence of maratha forces and terror caused by East India Company in these adverse circumstances precipited the rebellion. The stronger armies of bastar supported by the British and marthas crushed the rebellion; A massacre of halba tribesmen followed the defeat of halba army. However the revolt created conditions for the decline of the chalukya dynasty which in turn significantly altered the history of Bastar. 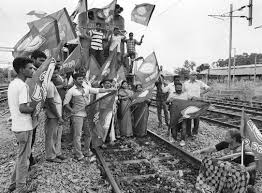 One of the objectives of rebellion was to establish a world free of loot, plunder and exploitation. The presence of Marathas and British threatened the identity of abhujhmarias and they resisted this through organizing the rebellion of Paralkot in 1825. The rebels were opposing the tax levied by Marathas rulers. In essence this rebellion was directed against the foreign interference and control of bastar and wanted to re- establish the freedom of bastar.

Tarapur rebellion was reaction against the invasion of their local culture and the tampering with their traditional principle of social, economic & political organisation. It started with an opposition to taxes levied under the pressure of anglo-maratha rule. For tribal, these experiences of coercive taxation were alien and new, and therefore they opposed them. The local Diwan, who used to collect the taxes from the common people, became the symbol of oppression for them. Most of the anger precipitated on the local Diwan as the higher authorities were out of their reach.

The maria rebellion, which lasted nearly 20 years from 1842 to 1863. It was apparently fought to preserve the practice of human sacrifice led Bu Hirma Manjhi. In reality the revolt was against the insensitive and intrusive handling of tribal faith. British and Marathas constantly entered Danteshwaritemple,this act polluted the sacred atmosphere of temple according to maria tribe’s faith. It was impossible to restore their originality & individuality. So it was defensive movement, a last resort for Maria tribes.

FIRST WAR OF INDEPENDENCE OF 1857

Southern Bastar was centre of revolt. Under the leadership of Dhruvarao Mariya a battle was waged against the British.  He was supported by tribesman. The southern part of Bastar acted as the pivotal point of the first freedom movement. Dhruvarao headed the movement and a battle was fought against the oppressive rule of british. Dhruvarao belonged to one of the many Maria tribes that are found in the region in and around Bastar. The tribe in which Dhruvarao belonged to is known as Dorlaon. All his tribesmen and even people from other tribes supported him in this freedom. It was one of the main centres of the revolt and history will forever remember the name of Bastar for its contribution to the First Struggle for Freedom.

This rebellion was against the decision of the british to give contracts for cutting Sal trees to contractors from Hyderabad in 1859. The people of the jamindaris, who were involved in the cutting of trees, were known as kois. The contractors who were offered the contract were known for exploitation of tribal.

In 1867, Gopinath Kapardas was appointed as diwan of bastar state and was responsible for the large scale expoitation of tribal population. Tribals from different paraganas jointly requested the king to remove the diwan but the king refused repeatedly. The rebelling tribe surrounded Jagdalpur on 2nd march 1876; the king with great difficulty was able to inform the british force.  Finally a strong british army sent by the Resident of Orissa, crushed the rebellion.

It was the culmination of the 150 Years of protests and rebellion in bastar. The rebellion was widespread. (46 of the 84 Paraganas of Bastar).

The initiative was taken by Dhurwa tribesman of kanger, where reservation took place. An important figure was Gunda Dhurfrom Nethanar Village. In 1910 mango barks, a lump of earth, chillies and arrow began circulating between villages.