Chattisgarh Forests and Vegetation–The state of Chhattisgarh being placed in Deccan bio-geographical Area, houses an important part of that rich and unique biological diversity. What is a more conspicuous is that the state is significantly rich in endemism with respect to many plants having medicinal importance.

Biogeographically, the state falls in Deccan bio-region comprising representative fauna of central India like the tiger , leopard ,gaur ,sambhar  , chital , nilgai and wild boar . The state is a proud possessor of rare wildlife like the wild buffalo  and hill myna  which have been declared as rare and endangered. Apart from the species diversity, the state is also endowed with rich genetic diversity. The variation in the genetic composition of individuals within or among floristic and faunal species is large.

The forests of the state fall under two major forest types, i.e., Tropical Moist Deciduous forest and the Tropical Dry Deciduous forest. The state of Chhattisgarh is endowed with about 22 varied forest sub-types existing in the state.

These forests are found in areas of moderate rainfall of 100 to 200 cm per annum, mean annual temperature of about 27°C and the average annual relative humidity of 60 to 75 per cent. Found in southern part of chattisgarh. The trees of these forests drop their leaves for about 6-8 weeks during the spring and early summer when sufficient moisture for the leaves is not available. 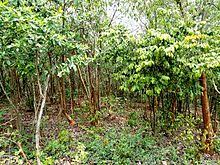 The sub-soil water is not enough to enable the trees to retain their leaves throughout the year. These are very useful forests because they yield valuable timber and several other forest products. The main species found in these forests are , sal, padauk, laurel, white chuglam, badam, dhup, chikrosi, kokko, haldu, rosewood, mahua, bijasal, lendi, semul, irul, dhaman, amla, kusum, tendu, paula, jamun, bamboo, etc. It is comparatively easy to exploit these forests due to their high degree of gregariousness.

These are similar to moist deciduous forests and shed their leaves in dry season. The major difference is that the species of dry deciduous forests can grow in areas of comparatively less rainfall of 100-150 cm per annum.

They represent a transitional type; on the wetter side, they give way to moist deciduous and on the drier side they degenerate into thorn forests. Such forests are characterised by closed and rather uneven canopy, composed of a mixture of a few species of deciduous trees, rising upto a height of 20 metres or so. Enough light reaches the ground to permit the growth of grass and climbers. Bamboos also grow but they are not luxuriant. The important species are teak, axlewood, tendu, bijasal, rosewood, amaltas, palas, haldu, kasi, bel, lendi, common bamboo, red sanders, anjair, harra.

The maximum Chattisgarh Forests and Vegetation are covered is that of mixed forests, which includes teak or sal mixed with other species like saja, bija, lendia , haldu ,dhaora , salai , aonla , amaltas , gamhar , etc. Dazzling white kulu trees scattered around stand out conspicuously among the various hues of green. The ground is covered with maze of grasses, plants, bushes and saplings. Pterocarpusmarsupium is also used for control of blood sugar in Diabetes since ancient times in India.

Medicinal trees and plants of various kinds are found in abundance in the Chattisgarh Forests and Vegetation.

The basic objectives that should govern the State Forest Policy are the following: –

Unlocking of the vast array of forest resources on sustainable basis for enhanced well-being of local people by converting these open access resources (OAR) into community controlled, prioritized, protected and managed resources.

– A shift in accent from major to minor forest produces, from crown to multi tier forestry and from flagship species to smaller denizens of the forests.

– Maintenance of environmental stability through preservation and where necessary, restoration of ecological balance that has been adversely disturbed by serious depletion of forests in the state.

– Conserving the Bio- cultural heritage of the state by preserving the biologically rich natural forests that provide the essential cultural milieu to the tribals of the state.

– Checking the denudation of forests and soil erosion in the catchment area of the rivers, and reservoirs for soil and water conservation; mitigating the floods and droughts; recharging of water bodies, aquifers and for the retardation of siltation of the reservoirs.

– Meeting the requirements of fuel wood, fodder, minor forest produce and small timber of the rural and tribal population with due regard to the carrying capacity of the forests.

– The derivation of direct economic benefit from the forests of the state shall be subordinated to the requirements of the environmental stability and maintenance of ecological balance in the state.

– Creating appropriate policy and legal framework for the achievement of these objectives.