Chhattisgarh was formed on 1 November 2000 by partitioning 16 Chhattisgarhi-speaking southeastern districts of Madhya Pradesh. The capital city of Chhattisgarh is Raipur. Uttar Pradesh in North, Jharkhand in North-East, Orissa in East, Andhra Pradesh in South, Maharashtra in South-West and M.P. & Maharashtra in West form its borders.  Currently chhattisgarh comprises 27 districts.. 43% Land is covered by Forests. 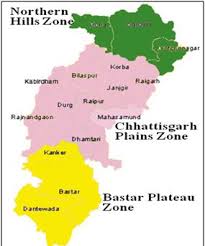 River System – There is a network of 4 rivers. These rivers are Mahanadi, Godawari, Ganga and Narmada.  In this network, 31 large, small rivers and tributories, flow from East to West, covering a length of about 3573 Kms. in the State.