Rivers and Drainage system of Chhattisgarh:-

Mahanadi Basin extends over an area of 141589 Sq km which is nearly 4.3 percent of total geographical area of the country. The basin lies in the states of Chhattisgarh (75,858.45 Sq km), Orissa (65,580 Sq km), Bihar (635 Sq km) and Maharashtra (238 Sq km). Mahanadi river rises from Raipur district of Chhattisgarh and flows for about 851 km before its outfall into the Bay of Bengal . Its main tributaries are Seonath, Jonk, Hasdeo, Mand, Ib, Ong, and Tel. Most of the tributaries of Mahanadi join in from the western and northern side. Physiographically the basin can be divided into four regions namely the Northern, Plateau, the Eastern Ghats the Coastal Plain and the Erosional Plains of Central Table Land . The first two are hilly regions. The coastal plain is the central interior region of the basin traversed by the river and its tributaries. Main Sub Basins of Mahanadi are:–

The Seonath River Originates near village Panabaras in the Rajnandgaon District. The Basin area of river up to confluence with the Mahanadi River is 30,860 Sq Km . The river traverses a length 380 Km. The main tributaries of Seonath river are Tandula, Kharun, Arpa, Hamp, Agar and Maniyari Rivers. Tandula is not only an important tributary, but also forms a big reservoir in the district, from which a canal carries water towards the northeast of Durg. Kharum and Jamunia are two other important tributaries near Raipur.  The mean annual rainfall in the basin varies from 1005 mm to 1255 mm.

Hasdeo River, a major tributary of the mahanadi, is one of the important rivers of Chhatisgarh.  Hasdeo has a total length of 245 Km and has its origin in Mendra village. It flows towards south of the state, through Koriya, Bilaspur and Korba Districts. During its course, this river merges with its tributaries such as Gej and the Chornai on the left bank and the Tan and the Ahiran on the right before it meets the mahanadi. Other tributaries of Hasdeo include Jhumka and Bania. 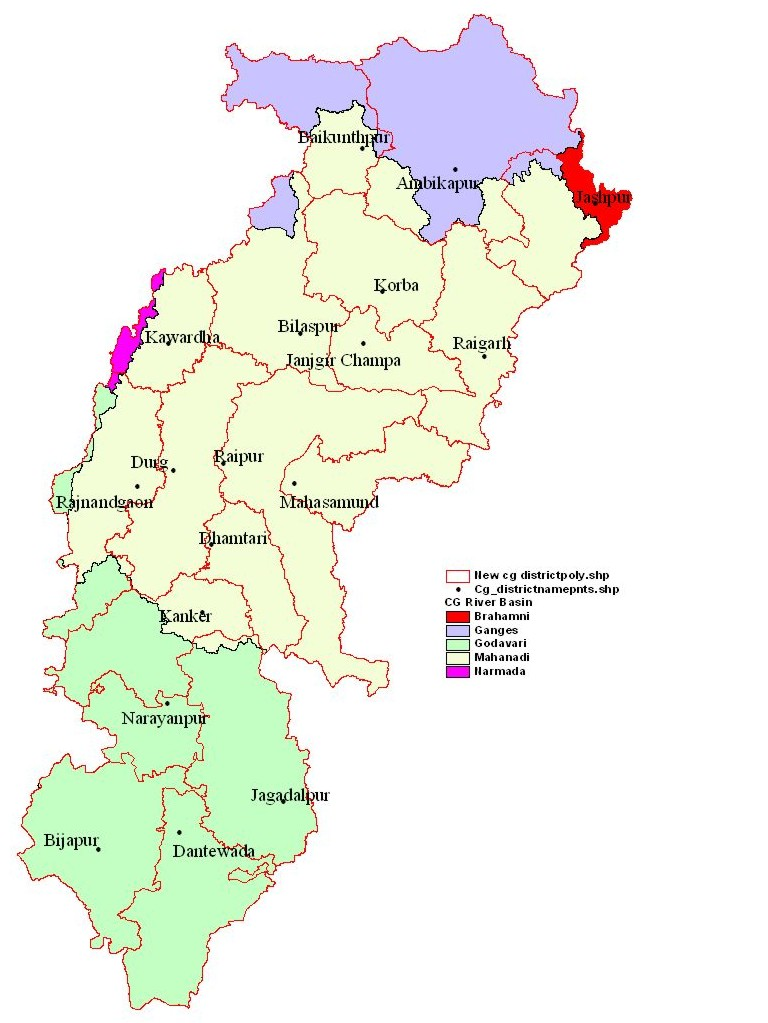 River Pairi, running down from Raipur uplands, drains a significant portion of the entire undivided Raipur district. Originating in the Bhatigarh hills (493 m) located near Bindravagarh of Raipur District, the river flows southwards and meets the mahanadi near Rajim.

This is an important tributary of Mahanadi, which meets the main river at Sonpur or Subarnapur. Baidyanath temple, which is famous for the Kosaleshwar Shiva Temple, is located on the left bank of the tel river.

Mand river joins the Mahanadi in Chandrapur, in Maharashtra, before the river reaches the Hirakund Dam.

It flows via the Mountanious areas of the Mahasamund, the river goes eastwards to join the Mahanadi form Shivrinarayan.

Kelo river originates in the Ludega hills located in the Raigarh District. It reaches a place name MahadevPali in Orrisa and joins the Mahanadi.

Mahanadi is lesser, both in number and in volume, three important rivers deserve a mention here. A small river, Silari, is important as it links a big reservoir, Maramsilli, in the southwest of

Godavari rises in the Sahyadris near Triambakeswar, about 80 km from the shore of Arabian Sea, at an elevation of 1,067 m in the Nasik district of Maharashtra. After flowing for about 1,465 km in a general south-easterly direction through Maharashtra and Andhra Pradesh, Godavari falls into the Bay of Bengal north of Rajahmundry. The basin extends over an area of 312,813 Sq km, which is nearly 10% of the total geographical area of the country. Out of the total basin area of 312,813 Sq km, the major parts of the basin falls in Maharashtra state. Further, about 38694.02 Sq km which is only 12.36% of the basin area falls in the Chhattisgarh state.

Indravati is a important tributary of Godavari. The river and its tributaries are located in the Bastar area.  Originating from Orissa it divides the area into two halves. Its major tributaries are Narangi, Baordhig, Nibra, Kotri, and a stream, the Chintavagu.

Besides the Indravati and its tributaries, there are three important streams in the Bastar area, all direct tributaries of Godavari. These are Talperu, Chinta, and Sabari. In the Dandakaranya region lying to the south of Indravati most of the rivers are perennial, though with highly fluctuating regime. Due to rapid run-off and evaporation, the land dries up very quickly after the monsoons. A very negligible amount of their water is used for agriculture.

The river Son is an right bank tributary of the river Ganga. it originates from Amarkantak plateaeu of Maikala range in Bilaspur district of Chhatisgarh. Kanhar, Rihand, Gopad, Banas, Bijal are its other tributaries.

The Brahmani Basin lies in the districts of Raigarh and Sarguja in Chhattisgarh, Ranchi and Singhbhumi in Jharkhand and Sundergarh, Deogarh, Sambalpur, Angul, Dhenkanal, Keonjhar, Jajpur and Kendrapara in Orissa. Brahmani basin is situated between Mahanadi Basin (on the right) and Baitarani Basin (on the left). Chhotanagpur Plateau in the East and South bound the basin, in the north a ridge separates it from Mahanadi basin, and to the east of the basin lie the Bay of Bengal and the Baitarani basin. Out of the total basin area of 39,269 Sqkm, the major parts of the basin falls in Orissa state. Further, about 1,394.45 Sqkm which is only 3.55% of the basin area falls in the Chhattisgarh state.

The Narmada River, rises in the Amarkantak Plateau of Maikal range in the Shahdol district of Madhya Pradesh at an elevation of 1057 meters. The river travels a distance of 1,312 km before it falls into Gulf of Cambay (Khambat) in the Arabian Sea near Bharuch in Gujarat.           The Narmada basin extends over an area of 98,796 Sq km and Out of the total basin area about 743.88 Sq km which is only 0.75% of the basin are falls in the Chhattisgarh state.

Thus, we find that there are many Rivers and Drainage system of Chhattisgarh and sub-basins in the region, especially in the southern and eastern parts of the state. The rivers draining these basins usually carry huge volumes in the rains, but are usually flowing in deep gorges in hilly areas. These offer a rich potential for rainwater harvesting and surface irrigation projects that protect kharif.