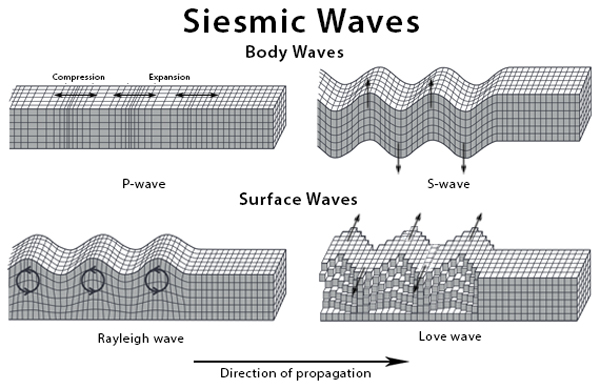 They are generated due to the release of energy at the focus and moves in all directions traveling through the body of the earth. Hence, the name – body waves. They travel only through the interior of the earth. Body waves are faster than surface waves and hence they are the first to be detected on a seismograph. There are two types of body waves as primary waves and secondary waves.

Primary waves are the fastest body waves (twice the speed of s-waves) and are the first to reach during an earthquake. They are similar to sound waves, i.e, they are longitudinal waves, in which particle movement is in the same direction of wave propagation. They travel through solid, liquid and gaseous materials.

They arrive at the surface with some time-lag after primary waves. They are slower than primary waves and can pass only through solid materials. This property of s-waves led seismologists to conclude that the earth’s outer core is in a liquid state. (the entire zone beyond 105o from the epicenter does not receive S-waves)

When the body waves interact with surface rocks, a new set of waves is generated called as surface waves. These waves move along the earth surface. Surface waves are also transverse waves in which particle movement is perpendicular to the wave propagation.