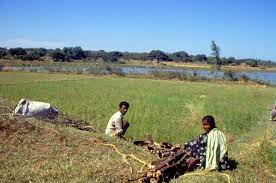 There has been a significant increase in agricultural output and improvement in technology during the last fifty years.