Global warming is a term used for a gradual rise of atmospheric temperature and consequent changes in the radiation balance mainly due to human action leading to climatic change at different levels – local, regional and global. As per recent estimates, it has been found that  the surface air temperature over the past 100 years has increased by about 0.5 C to 0.7 C.

In the future, it is very likely that rising temperatures  will lead to more frequent heat waves, and virtually  certain that the seas will rise, which could leave low-  lying nations awash in seawater. Warmer temperatures will alter weather patterns, making it likely that there will be more intense droughts and  more intense rain events. Moreover, global warming  will last thousands of years.

It is estimated that if the present rate of increase in CO level continues, it will result in rise of atmospheric temperature by 2 C to 3 C by end of 21 century. This will result in receding many glaciers; melting of icecaps in the polar regions and disappearance of deposits of ice on the other 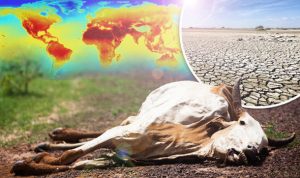 parts of world in large scale.

The Intergovernmental Panel on Climate Change estimates that Earth will warm between two
and six degrees Celsius over the next century. The range in estimate comes from running different emission scenarios through several different global climate models. Scenarios that assume that people will burn more and more fossil fuel provide the estimates in the top end of the temperature range, while scenarios that assume that greenhouse gas emissions will grow slowly give lower temperature predictions.

A slight increase in global temperature can adversely affect the world food  production. Thus the wheat production zones in the northern latitudes will be shifted to north of temperate latitudes. The biological productivity of the ocean would also decrease due to warming of the surface layer, which in turn reduces the transport of nutrients from deeper layers to the surface by vertical circulation.