Man-animal conflicts are common in various parts of the country. Incidents of man-animal conflict are reported from States/Union Territories of the country. In India, wild elephants probably kill far more people than tiger, leopard or lion. But, surprisingly, human conflict involving leopard draws great amount of public attention compared to other animals. Other carnivores – tigers, lions and wolves which have been known for causing a large number of human deaths in the past, are now mostly restricted in range and their impact is not as widespread as that of the leopard. The 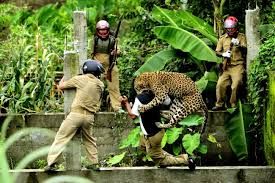 Major Causes for Human and wild animal struggle are:-

The Government   has initiated a number of steps in this regard including the following: