Under the plan of 3 June, more than 562 princely states were given the option of joining either India or Pakistan, or choosing independence. Indian nationalists and large segments of the public feared that if these states did not accede, most of the people and territory would be fragmented. The Congress as well as senior British officials considered Patel the best man for the task of achieving unification of the princely states with the Indian dominion.

Patel asked v.p.menon a senior civil servant with whom he had worked over the partition of India to become his right-hand as chief secretary of the States Ministry. On 6 May 1947, Patel began lobbying the princes, attempting to make them receptive towards dialogue with the future Government and trying to forestall potential conflicts. Patel used social meetings and unofficial surroundings to engage most monarchs, inviting them to lunch and tea at his home in Delhi At these meetings, Patel stated that there was no inherent conflict between the Congress and the princely order. Nonetheless, he stressed that the princes would need to accede to India in good faith by 15 August 1947.

Patel invoked the patriotism of India’s monarchs, asking them to join in the freedom of their nation and act as responsible rulers who cared about the future of their people. He persuaded the princes of 565 states of the impossibility of independence from the Indian republic, especially in the presence of growing opposition from their subjects.

He proposed favorable terms for the merger, including creation of privy purses for the descendants of the rulers. While encouraging the rulers to act with patriotism, Patel did not rule out force, setting . deadline of 15 August 1947 for them to sign the instrument of accession document. All but three of the states willingly merged into the Indian union—only Jammu and Kashmir, junagadh and Hyderabad did not fall into basket.

Integration of Junagadh: The West Gujarat known as Saurastra constituted a number of small states which did not have much potential from the point of view of economic and political independence. In all, 327 such States existed in Gujarat. Sardar succeeded in bringing the small states together and it was a very important step towards national solidarity although the states were in theory free to choose whether they wished to accede to India or Pakistan, Mountbatten had pointed out that “geographic compulsions” meant that most of them must choose India. 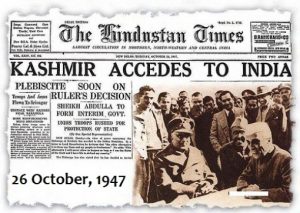 In effect, he took the position that only the states that shared a border with Pakistan could choose to accede to it. The Nawab of Junagadh, a princely state located on the south-western end of Gujarat and having no common border with Pakistan, chose to accede to Pakistan ignoring Mountbatten’s views, arguing that it could be reached from Pakistan by sea. The rulers of two states that were subject to the suzerainty of Junagadh— Mangrol and Babariawad—reacted to this by declaring their independence from Junagadh and acceding to India. In response, the Nawab of Junagadh militarily occupied the states. The rulers of neighboring states reacted angrily, sending their troops to the Junagadh frontier and appealed to the Government of India for assistance.

A group of Junagadhi people, led by Samaldas Gandhi, formed a government-in-exile, the Aarzi Hukumat (“temporary government”). India believed that if Junagadh was permitted to go to Pakistan, the communal tension already simmering in Gujarat would worsen, and refused to accept the accession. The government pointed out that the state was 80% Hindu, and called for a plebiscite to decide the question of accession. Simultaneously, they cut off supplies of fuel and coal to Junagadh, severed air and postal links, sent troops to the frontier, and reoccupied the principalities of Mangrol and Babariawad that had acceded to India.

A plebiscite was conducted in February 1948, which went almost unanimously in favour of accession to India.

Kashmir conflict: Kashmir was also a problem. At the time of the transfer of power, Kashmir was ruled by Maharaja Hari Singh, a Hindu, although the state itself had a Muslim majority. Hari Singh was equally hesitant about acceding to either India or Pakistan, as either would have provoked adverse reactions in parts of his kingdom. He signed a Standstill Agreement with Pakistan and proposed one with India as well, but announced that Kashmir intended to remain independent. However, his rule was opposed by Sheikh Abdullah, the popular leader of Kashmir’s largest political party, the National Conference, who demanded his abdication.

Pakistan, attempting to force the issue of Kashmir’s accession, cut off supplies and transport links. The chaos in Punjab resulting from Partition had also severed transport links with India, meaning that Kashmir’s only links with the two dominions was by air. Rumours about atrocities against the Muslim population of Poonch by the Maharajah’s forces caused the outbreak of civil unrest. Shortly thereafter, Pathan tribesmen from the North-West Frontier Province of Pakistan crossed the border and entered Kashmir. The invaders made rapid progress towards Srinagar. The Maharaja of Kashmir wrote to India, asking for military assistance.

India required the signing of an Instrument of Accession and setting up an interim government headed by Sheikh Abdullah in return. The Maharaja complied, but Nehru declared that it would have to be confirmed by a plebiscite, although there was no legal requirement to seek such confirmation. Indian troops secured Jammu, Srinagar and the valley itself during the First Kashmir War, but the intense fighting flagged with the onset of winter, which made much of the state impassable.

Prime Minister Nehru, recognizing the degree of international attention brought to bear on the dispute, declared a ceasefire and sought UN arbitration, arguing that India would otherwise have to invade Pakistan itself, in view of its failure to stop the tribal incursions. The plebiscite was never held, and on 26 January 1950, the Constitution of India came into force in Kashmir, but with special provisions made for the state. India did not, however, secure administrative control over all of Kashmir. The northern and western portions of Kashmir came under Pakistan’s control in 1947, and are today Pakistan-administered Kashmir. In the 1962 Sino-Indian War, China occupied Aksai Chin.

Hyderabad Operation Polo: Sardar’s greatest role in the integration of states was his able handling of the Hyderabad crisis. Most of the states acceded to India, Hyderabad was a landlocked state that stretched over 82,000 square miles (over 212,000 square kilometres) in southeastern India. While 87% of its 17 million people were Hindu, its ruler Nizam Osman Ali Khan was a Muslim, and its politics were dominated by a Muslim elite. The Muslim nobility and the Ittehad-ul-Muslimeen, a powerful pro-Nizam Muslim party, insisted Hyderabad remain independent and stand on an equal footing to India and Pakistan. Accordingly, the Nizam in June 1947 issued a firman announcing that on the transfer of power, his state would be resuming independence. The situation deteriorated further in 1948. The Razakars (“volunteers”), a militia affiliated to the Ittehad-ul-Muslimeen and set up under the influence of Muslim radical Qasim Razvi, assumed the role of supporting the Muslim ruling class against upsurges by the Hindu populace, and began intensifying its activities and was accused of attempting to intimidate villages.

The Hyderabad State Congress Party, affiliated to the Indian National Congress, launched a political agitation. Matters were made worse by communist groups, which had originally supported the Congress but now switched sides and began attacking Congress groups. Attempts by Mountbatten to find a negotiated solution failed and, in August, the Nizam, claiming that he feared an imminent invasion, attempted to approach the UN Security Council and the International Court of Justice.

India  now insisted that if Hyderabad was allowed to continue its independence, the prestige of the Government would be tarnished and then neither Hindus nor Muslims would feel secure in its realm. The date for the attack was fixed as 13 September, even though General Sir Roy Bucher, the Indian chief of staff, had objected on grounds that Hyderabad would be an additional front for the Indian army after Kashmir.

On 13 September, the Indian Army was sent into Hyderabad under Operation Polo on the grounds that the law and order situation there threatened the peace of South India. The troops met little resistance and between 13 and 18 September took complete control of the state. The Nizam was retained as the head of state in the same manner as the other princes who acceded to India.He thereupon disavowed the complaints that had been made to the UN and, despite vehement protests from Pakistan and strong criticism from other countries, the Security Council did not deal further with the question, and Hyderabad was absorbed into India.

Other States: Regarding the accession of the other states, Sardar acted like a magic-stick. In no time, he could merge the States of Orissa, Chhatishgarh, Rajasthan, Punjab and so on. He realized that the people of states were supreme and by organizing the States’, people for establishment of popular government, he could achieve success. He had, with him, able workers and supporters who had worked untiringly to bring such a merger in record time. There are innumerable instances where Sardar could bring down the rulers of the States to terms and agree them to accession to India as per the terms and conditions stipulated by the Government of India. Sardar had to deal with diversified Kings having different attitude with caution and applying varied, human, social, political and psychological approach.