Quit India Movement which took place in the month of August has been one of the most popular mass movements during the freedom struggle of India. With the failure of Cripps Mission the political situation had worsened leaving every individual with full of frustration and disgust. People in total frustration eagerly waited for one such popular movement which could bring a complete end to Imperialism in India. It was at this moment when Congress under the leadership of Mahatma Gandhi called for Quit India Movement which turned out to be the most popular mass movement engulfing every section of the society. Quit India Movement was one of the active actions taken by the Indian National Congress passed through the resolutions of July and August 1942 insisting for an immediate independence for India. Against the background of Cripps Mission and the compulsive inclusion of India in the war the political scenario in India had worsened .As such if Congress was to keep its promises for an independent India , the time has come when Congress was to give a final blow to British paramount in India.

In July, Congress passed a resolution demanding immediate end of British rule in India. The resolution gave a brief account of the efforts made by the congress to convince the British Rulers of the necessity to make India free not only for the benefit for India but for the safety of the world as well as the end of Nazism, Fascism, militarism and other forms of imperialism all over the world. It further claimed that it had no intentions to humiliate the Allied Powers and so appealed the British Rule to withdraw its rule from India as soon as possible. It further reiterated its efforts to solve the ever existing the communal drifts and cooperate with the efforts of United Nations to create a peaceful world .As such if the government fails to grant the demands of the Congress then it will compel the party to go for a mass movement on the non violence basis which will gather all its non violent strength as collected since 1920 and organize a mass civil disobedience movement. 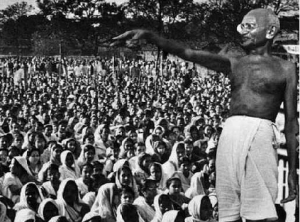 The July Resolution was purposely neglected by the government who now blamed the demands as wrong timed. This forced the Indian National Congress to pass another resolution in August 1942, which took the July resolution as the basis for the new resolution. The Resolution for Quit India was made in the Bombay (now Mumbai) session of Congress held in 8th August, 1942 .The agenda of the resolution declared that the committee resolves to sanction for the vindication of India`s alienable right to freedom and independence, the starting of a mass struggle on the non – violent lines on the widest possible scale so that the country must utilize all non violent strength which it has gathered since last twenty years. The committee placed the entire movement under Gandhi`s leadership and it was expected that with launching of the movement every man and woman who will be participating the movement must function within four general instruction of the party. In his famous `Do or Die` speech Gandhi declared four parameters of the Quit India Movement – firstly forget the differences between the Hindus and the Muslims and think yourself as an Indian only; secondly realize that our quarrel is not with the British people but with Imperialism under which they function; thirdly feel from today that you are a free man and not a dependent; and fourthly Do or Die, either free India or in the attempt.

In spite of his passing of the resolution he declared that the struggle has yet not started and it will commence only after he meets the Viceroy with these demands.  He appealed to all the journalists, civil servants, princes, soldiers and students to realize their responsibility towards the nation and participate if they wish to see India free on the non – violent means.

Reaction of British to the Movement

The attitude of the British Government had also changed which now wanted to suppress every movement which will hamper its war image .As a result the quit India resolution was passed on 8th August and by 24 hours on 9 August Gandhi and all prominent leaders were arrested. Congress was declared an illegal party and simultaneous arrests took place all over the country. Quit India Movement has been popularly divided into three phases .The first phase started from the day of Gandhi`s arrest. The news of Quit India Movement and Gandhi`s arrest took the people unaware but the reaction was spontaneous. All the major cities of India which included Bombay (now Mumbai), Calcutta (now Kolkata), Bangalore, Ahmedabad, Patna and many more cities faced hartals and the entire nation came to a standstill. Government`s reaction was repressive which began with indiscriminate firing and mass arrest.

The second phase began from the middle of August when the, focus shifted from the center to the out skirts where mobs began to attack the court buildings. Places like Eastern parts of Uttar Pradesh, Bihar and Midnapore in West Bengal , parts of Maharashtra, Karnataka and Orissa where infuriated mobs tried to set up parallel governments though short lived and unsuccessful. The large suppressions executed by the government helped the people to organize the third phase of the movement which entered its longest and most formidable phase. This was characterized by the terrorist activities of the educated youth and was directed against communications and police confrontations, occasionally rising to the level of guerrilla warfare. In Bombay (now Mumbai), Poona, Satara, Baroda, parts of Kerela, Karnataka and Uttar Pradesh underground organizations became active. Government atrocities crossed all limits but failed to restrict the movement from reaching its climax.

On the other side the war also came in favour of Allied powers .This made the secretary of State to condemn the Congress as growing revolutionary under Gandhi which aimed at crippling the government. As the government continued to blame Mahatma Gandhi for the violence taking place after the declaration of Quit India Movement, Gandhi gave an ultimatum with a 21 days fasting which began in 10th February 1943 and ended in 3rd March. Its main purpose was to draw world`s attention towards India cause.

Overall the Quit India Movement was successful in breaking the myth o f the government that it was the most popularly accepted government and that it was run by the majority of people who were loyal to the crown. Turning out to be the most popular movement in the freedom struggle for India this movement saw participation from all sections of people.