During this period, the Indian economy essentially remained stagnant, growing at the same rate (1.2%) as the population.  India also experienced deindustrialization during this period. Compared to the Mughal era, India during the British colonial era had a lower per-capita income, a large decline in the secondary sector, and lower levels of urbanization. India’s share of the world economy and share of global industrial output declined significantly during British rule.

Some of the important features of Indian urban economy during this period are as follows:

In the seventeenth century, India was a relatively urbanised and commercialised nation with a buoyant export trade, devoted largely to cotton textiles, but also including silk, spices, and rice. India was the world’s main producer of cotton textiles and had a substantial export trade to Britain, as well as many other European countries, via the East India Company. Yet as the British cotton industry underwent a technological revolution during the late 18th to early 19th centuries, the Indian industry stagnated and deindustrialized. India also underwent a period of deindustrialization in the latter half of the 18th century as an indirect outcome of the collapse of the Mughal Empire.  Even as late as 1772, Henry Patullo, in the course of his comments on the economic resources of Bengal, could claim confidently that the demand for Indian textiles could never reduce, since no other nation could equal or rival it in quality. However, by the beginning of the nineteenth century, a beginning of a long history of decline of textile exports is observed . 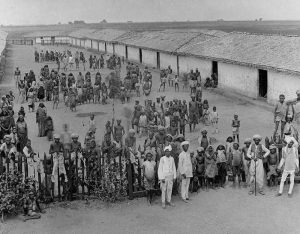 A commonly cited legend is that in the early 19th century, the East India Company (EIC), had cut off the hands of hundreds of weavers in Bengal in order to destroy the indigenous weaving industry in favour of British textile imports (some anecdotal accounts say the thumbs of the weavers of Dacca were removed). However this is generally considered to be a myth, originating from William Bolts’ 1772 account where he alleges that several weavers had cut off their own thumbs in protest at poor working conditions. Several historians have suggested that that the lack of industrialization was because India was still a largely agricultural nation with low wages levels, arguing that wages were high in Britain so cotton producers had the incentive to invent and purchase expensive new labour-saving technologies, and that wages levels were low in India so producers preferred to increase output by hiring more workers rather than investing in technology. Several economic historians have criticized this argument, such as Prasannan Parthasarathi who pointed to earnings data that show real wages in 18th-century Bengal and Mysore were higher than in Britain. Workers in the textile industry, for example, earned more in Bengal and Mysore than they did in Britain, while agricultural labour in Britain had to work longer hours to earn the same amount as in Mysore. According to evidence cited by the economic historians Immanuel Wallerstein, Irfan Habib, Percival Spear, and Ashok Desai, per-capita agricultural output and standards of consumption in 17th-century Mughal India was higher than in 17th-century Europe and early 20th-century British India.

British control of trade, and exports of cheap Manchester cotton are cited as significant factors, though Indian textiles had still maintained a competitive price advantage compared to British textiles up until the 19th century. Several historians point to the colonization of India as a major factor in both India’s deindustrialization and Britain’s Industrial Revolution. British colonization forced open the large Indian market to British goods, which could be sold in India without any tariffs or duties, compared to local Indian producers who were heavily taxed, while in Britain protectionist policies such as bans and high tariffs were implemented to restrict Indian textiles from being sold there, whereas raw cotton was imported from India without tariffs to British factories which manufactured textiles from Indian cotton. British economic policies gave them a monopoly over India’s large market and raw material such as cotton. India served as both a significant supplier of raw goods to British manufacturers and a large captive market for British manufactured goods.

India’s share of the world economy went from 24.4% in 1700 to 4.2% in 1950. India’s GDP (PPP) per capita was stagnant during the Mughal Empire and began to decline prior to the onset of British rule.India’s share of global industrial output also declined from 25% in 1750 down to 2% in 1900. At the same time, the United Kingdom’s share of the world economy rose from 2.9% in 1700 up to 9% in 1870,and Britain replaced India as the world’s largest textile manufacturer in the 19th century. Mughal India also had a higher per-capita income in the late 16th century than British India had in the early 20th century, and the secondary sector contributed a higher percentage to the Mughal economy (18.2%) than it did to the economy of early 20th-century British India (11.2%). In terms of urbanization, Mughal India also had a higher percentage of its population (15%) living in urban centers in 1600 than British India did in the 19th century.

number of modern economic historians have blamed the colonial rule for the dismal state of India’s economy, with investment in Indian industries limited since it was a colony. Under British rule, India experienced deindustrialization, the decline of India’s native manufacturing industries. The economic policies of the British Raj caused a severe decline in the handicrafts and handloom sectors, with reduced demand and dipping employment; the yarn output of the handloom industry, for example, declined from 419 million pounds in 1850 down to 240 million pounds in 1900. Due to the colonial policies of the British, the result was a significant transfer of capital from India to England, which led to a massive drain of revenue rather than any systematic effort at modernisation of the domestic economy.

British investors built a modern railway system in the late 19th century—it became the then fourth largest in the world and was renowned for quality of construction and service. The government was supportive, realising its value for military use, as well as its value for economic growth. All the funding and management came from private British companies. The railways at first were privately owned and operated, and run by British administrators, engineers and skilled craftsmen. At first, only the unskilled workers were Indians. A plan for a rail system in India was first put forward in 1832. The first train in India ran from Red Hills to Chintadripet bridge in Madras in 1837. It was called Red Hill Railway. It was used for freight transport only. Few more short lines were built in 1830s and 1840s but they did not interconnect and were used for freight transport only. The East India Company (and later the colonial government) encouraged new railway companies backed by private investors under a scheme that would provide land and guarantee an annual return of up to five percent during the initial years of operation. The companies were to build and operate the lines under a 99-year lease, with the government having the option to buy them earlier. In 1854 Governor-General Lord Dalhousie formulated a plan to construct a network of trunk lines connecting the principal regions of India. Encouraged by the government guarantees, investment flowed in and a series of new rail companies were established, leading to rapid expansion of the rail system in India.

In 1853, the first passenger train service was inaugurated between Bori Bunder in Bombay and Thane, covering a distance of 34 km. The route mileage of this network increased from 1,349 km in 1860 to 25,495 km. in 1880 – mostly radiating inland from the three major port cities of Bombay, Madras, and Calcutta. Most of the railway construction was done by Indian companies supervised by British engineers. The system was heavily built, in terms of sturdy tracks and strong bridges. Soon several large princely states built their own rail systems and the network spread to almost all the regions in India. By 1900 India had a full range of rail services with diverse ownership and management, operating on broad, metre and narrow gauge networks.

The Great Depression The worldwide Great Depression of 1929 had a small direct impact on India, with relatively little impact on the modern secondary sector. The government did little to alleviate distress, and was focused mostly on shipping gold to Britain. The worst consequences involved deflation, which increased the burden of the debt on villagers while lowering the cost of living. In terms of volume of total economic output, there was no decline between 1929 and 1934. Falling prices for jute (and also wheat) hurt larger growers. The worst hit sector was jute, based in Bengal, which was an important element in overseas trade; it had prospered in the 1920s but was hard hit in the 1930s. In terms of employment, there was some decline, while agriculture and small-scale industry also exhibited gains.The most successful new industry was sugar, which had meteoric growth in the 1930s.