Development of Railway, Industralization and constitutional development during British period

The British created the Indian Railways. They envisioned it, planned it, engineered it and instructed poor Indian laborers how to build it. There is a common misconception that the British “gifted” India the Railways. Nothing could be more wrong. The British did not build the Railways out of love for India or seeing the need to “prosperify” vast masses of poor Indians. They couldn’t have cared less. In order to govern this huge, disconnected and diverse country efficiently, they needed stuff to be moved around the country quickly, like the mail of the Empire, materials, officials, laborers, troops and so on. During that time, the revolutionary new “Railway technology” in England was accelerating industrialization and development of the Kingdom. The British realized that an extensive railway network was exactly what they needed in India to consolidate their power, control the local population, reach into the hinterlands and exploit the country to the maximum. And this was what led to the beginning of the Indian Railways. Letting the local populace use the trains was just a generosity extended on their part. Yes, the British built their Indian empire not on the power of gunpowder, but on the power of steam.

Between 1854 and 1899, several railway companies were incorporated and each began work on their own lines, pushing further and further inland from the coast. The biggest companies were GIPR (Great Indian Peninsular 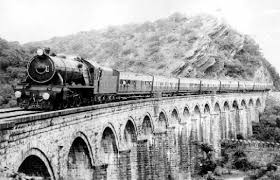 Railway) Bombay, EIR (East India Railway) Calcutta, MRC (Madras Railway Company) Madras, BB&CI (Bombay Baroda & Central India) Surat and others. EIR completed construction of the Calcutta – Delhi line via Allahabad in 1864 after 9 years of work and the first train rolled into Delhi Junction (DLI) the same year. But a regular train began running from Calcutta to Delhi only in 1866, was the precursor of today’s Howrah – Kalka Mail. BB&CI completed construction of a line from Ahmedabad to Bombay in 1867 and started a service from Virar to Bombay Backbay (present day Churchgate), probably marking the beginnings of what is today Mumbai’s most famous local train. By 1854, the very next year after the inaugural run, the Bombay – Thane line was doubled and extended up to Kalyan on the way to Igatpuri. But seemingly impossible Ghats obstructed the easy construction of a line out of Mumbai, and it took GIPR 10 years to finish the line across the Thal (Thull) Ghat section to reach Igatpuri. By 1870, that line had extended to Jabalpur via Manmad and Itarsi, where it met EIR’s Allahabad – Jabalpur branch line, completing the Bombay – Calcutta line. Meanwhile, GIPR was also hard at work trying to cross the Khandala (Bhore) Ghat to reach Pune from Mumbai.

This huge railway network altered India’s transport system. As a result, transport costs were greatly reduced thereby permitting new opportunities for profit.  Regional specialisation began to occur and trade (both domestic and foreign) flourished. India became a nation with its local centres linked by rail to each other arid to the world.  Railways made possible the establishment of a well-knit market. Railways, by establishing these links, had an impact throughout the economy. Karl Marx observed that the railway system in India would become “truly the forerunner of modern industry”.  “It was believed that railways would assist the economic development of India and help the import and distribution of manufactures and the collection and export of raw materials and agricultural produce. The official view was that the “the benefits covered by railways were at all-time great.”

But nationalists lambasted against this official claim and pinpointed that it was the railway which was responsible for the eclipse of some important industries of India. Despite massive investment in the nature of a ‘big push’ in railways rather than irrigation, ‘take off’ stage was hard-to come by. But this was too much for nationalists. Railways did certainly help the process of industrialisation.

The impact of railways was felt in all sectors of the Indian economy. Both people and goods made an extensive use of the railways. Vera Anstey, the distinguished British authority on economic development of India, argued that the construction of railways in India undoubtedly extended and revolutionised trade—both internal and external.

Before the advent of the railways in India, only a very small proportion of agricultural output was exported as agriculture was carried on only for subsistence. But railways transformed its very nature by commercializing it. Railways made India’s agriculture internationally competitive and, as a result, a floodgate of exports of agricultural products such as wheat, rice, jute oilseeds, and cotton was opened up.

Before the British rule, India was self-sufficient in textile and Cotton products but during the British rule, India fell down to the position of importing cloth from England.  In the 19th century A.D. British government abolished the tarrif protection of Indian goods. The country was reduced to the position of supplier of raw material to British industries. In 1850 Jute mills were established in India but there was no economic development in the country. In the time of 1st World War some goods, acquired by the people were reduced in India. This gave some industrial progress in our country.

When the officials of the East India Company acquired control over Bengal in 1765 they had little intention of making any innovations in its administration. They only desired to carry on profitable trade and to collect taxes for remission to England .From 1762 to 1772 Indian officials were allowed to function as before but under the overall control of the British governor and British officials. In 1772 the company ended the dual government and undertook to administer Bengal directly through its own set of officials. The East India Company was at this time a commercial body designed to trade with the East. But during the period that elapsed between the Pitt’s India Act (1784) and the Charter Act of 1833 the company was gradually relieved of its long held trading privileges in the east.

The Regulating Act of 1773 was first act of British Parliament to exercise indirect control over the affairs of East India Company’s rule in India. By 1773, the East India Company [EIC] was in deep financial trouble. The EIC owed money to both the Bank of England and the Government. The Company was important to Britain because it was a monopoly company in India and in the east and many influential people were shareholders. The Company failed to pay its dues to Government to maintain its monopoly.

Provisions of the Regulating Act are as follows:

This was an Act of the Parliament of Great Britain intended to address the shortcomings of the Regulating Act of 1773. The supervisory role of British Parliament on the affairs of the EIC failed to control the nepotism and corruption among the officials of EIC and the system was not improving. In order to exercise direct control rather than having regulated role, the new Act was necessitated whereby Government can take a more active role in the affairs of the Company.

Provisions of the 1784 Act are as follows:

The East India Company Act 1793, also known as the Charter Act of 1793, was an Act of the Parliament of Great Britain which renewed the charter issued to the British East India Company, and continued the Company’s rule in India.

Provisions of act are as follows:

It renewed the charter issued to the British East India Company, and continued the Company’s rule in India.

This Act of the Parliament of the United Kingdom was also meant for an extension of the royal charter granted to the company for further by 20 years.

It contained the following provisions:

Provisions of act are as follows:

The Government of India Act 1858

This Act was passed to better administer the possessions of EIC in India under the backdrop of Indian rebellion in 1857. It was deliberated the complexities involved in the governing India under the existing system and therefore wanted to end the company rule in India.

Provisions of the act are as follows:

The Indian Councils Act 1861 empowered the viceroy to make rules for more convenient transaction of business. By using this provision Lord Canning has transformed the Viceroy of India’s executive council into a cabinet run on the “portfolio system”for easy legislation and administration.

Provisions of the Act are as follows:

The Indian Councils Act 1909 commonly known as the Morley-Minto Reforms, was an Act of the Parliament of the United Kingdom that brought about a limited increase in the involvement of Indians in the governance of British India. John Morley, the Liberal Secretary of State for India, and the Conservative Governor-General of India, The Earl of Minto, believed that cracking down on uprising in Bengal was necessary but not sufficient for restoring stability to the British Raj after Lord Curzon’s partitioning of Bengal. They believed that a dramatic step was required to put heart into loyal elements of the Indian upper classes and the growing Westernised section of the population.

Provisions of the act are as follows:

The Government of India Act, 1919 or Montagu-Chelmsford Reforms

Lord Montagu, the secretary of Stateannounced in the House of Commons on 17th August 1917 that the goal of constitutional advance in India to be “ the gradual development of self governing institutions with a view to the progressive realisation of responsible government as an integral part of British Empire”. It was called “Montagu statement” or “August Statement” [not to be confused with August offer made by Lord Wawell in 1944]. The Montagu–Chelmsford Report in 1918 has laid down a fourfold formula to implement the policy in first stage.

Act was passed by British Parliament in August 1935. With 321 sections and 10 schedules, this was the longest act passed by British Parliament so far and was later split into two parts viz. Government of India Act 1935 and Government of Burma Act 1935. The Government of India Act 1935 derived material from four key sources viz. Report of the Simon Commission, discussions at the Third Round Table Conference, the White Paper of 1933 and the reports of the Joint select committees. This act ended the system of dyarchy introduced by GOI Act 1919 and provided for establishment of a Federation of India to be made up of provinces of British India and some or all of the Princely states. However, the federation never came into being as the required number of princely states did not join it.

Salient Features of the Government of India Act 1935 were as follows: