The caste system is a classification of people into four hierarchically ranked castes called varnas. They are classified according to occupation and determine access to wealth, power, and privilege.

The Brahmans, usually priests and scholars, are at the top. Next are the Kshatriyas, or political rulers and soldiers. They are followed by the Vaishyas, or merchants, and the fourth are the Shudras, who are usually laborers, peasants, artisans, and servants. At the very bottom are those considered the untouchables. These individuals perform occupations that are considered unclean and polluting, such as scavenging and skinning dead animals and are considered outcastes. They are not considered to be included in the ranked castes.

The four orders of society are believed to have originated from the self-sacrifice of Purusha-the creator, the primeval being and are mentioned in Rig Veda. 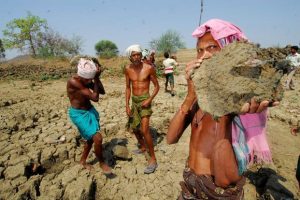 There seems to be a constant upward and downward social mobility between the different Varnas.When a lower Varna changed into a higher varna, it was known as jatyutkarsa or uplift of the caste. On the other hand, if a person belonging to a higher varna gradually descended into a lower Varna, it was known as jatyapakarsa or the degeneration of the caste. While the caste system is rigid without possibility of social mobility.

Caste on the other hand may be defined as a hereditary endogenous group which decides the individual‟s status in the social stratification and his profession. Caste is also defined as an aggregate of persons whose share of obligations and privileges is fixed by birth, sanctioned and supported by magic and or religion.

Caste is basically a closed system of stratification, since members are recruited on the criteria of ascribed status. In other words, an individual becomes a member of a caste in which he or she is born. Thus it is an ascribed status. Even if there is social mobility in the caste system through the process of Sankritisation, urbanizations, etc it is only a positional change rather than a structural change.

The main features of caste system in Indian Society are –

(5) Distinction in customs, dress and speech

(10) Concept of purity and impurity

(12) Prohibition on marriages outside one‟s own caste

The division of Indian society into various castes, together with the practice of untouchability, and the geographic isolation of some tribal communities has meant that these communities have lagged behind others in terms of educational and occupational attainment, political participation and with regard to opportunities for social mobility.

There were many movements and governmental actions that took place pre- and post- independence in order to overcome and attempt to eliminate the inequalities and injustices associated with the caste system. During the national movement, Gandhi began using the term “Harijans” (God‟s people) to refer to the untouchables in order to encourage a shift towards positive attitude towards the lower castes. B.R. Ambedkar campaigned for greater rights for Dalits in British India, and even after independence.

Theory of Sankritization and Mordernization has lead to the diminishing characteristic of caste system in Indian society.