Chhattisgarh to set up traditional medicine board

Chhattisgarh government announced to establish a Traditional Medicine Board to conserve local medicinal herbs and promote practice of Ayurvedic treatments in Chhattisgarh.

As per officials, chief minister Bhupesh Baghel on Sunday announced to establish a Traditional Medicine Board, in a state-level traditional vaidya sammelan-cum-training program at Pt Jawaharlal Memorial Medical College.

Chief minister said that Chhattisgarh is endowed with richness in three Ms – music, medicine and metallurgy. There is a variety of rich tradition of music and folk dance from Surguja to Bastar. In addition, metallurgical evidence has been found in Sirpur.

India likely to surpass Germany to become the fourth-largest economy in 2026: Report

India will overtake Germany to become the fourth-largest economy in the world by the year 2026.

According to a report by the UK-based Centre for Economics and Business Research (CEBR), India is all set to overtake Japan to become the third-largest economy by 2034.

The report titled ‘World Economic League Table 2020’ said that India is also set to become a 5 trillion dollar economy by 2026, 2 years later than the government’s target of 2024.

India has decisively overtaken both France and the UK to become the world’s fifth-largest economy in 2019.

The base data for 2019 is taken from the IMF World Economic Outlook.

From New Year’s day, any reef-toxic sunscreen imported or sold in Palau will be confiscated and the owner will be fined.

Palau is renowned for its marine life and is regarded as one of the world’s best diving destinations.

Along with the ban, Palau’s much-touted marine sanctuary came into effect on January 1.

This closes 80 per cent of its exclusive economic zone to fishing and other marine activities including mining and shark finning.

MyGov is a citizen engagement platform founded by the Government of India to promote the active participation of Indian citizens in their country’s governance and development.

It is also aimed at creating a common platform for Indian citizens to “crowdsource governance ideas from citizens”.

The portal is hosted and managed by the National Informatics Centre (NIC).

The ministry has accorded organised Group A status to RPF and renamed it.

The Railway Protection Force (RPF) is a security force, enacted by the Indian Parliament for “the better protection and security of railway property”.

The force is under the authority of the Indian Ministry of Railways.

Finance minister Nirmala Sitharaman launched a National Infrastructure Pipeline coordination mechanism with an investment plan worth ₹102 trillion in the next five years. The economic affairs secretary Atanu Chakraborty submitted its first report after consultation with 70 different stakeholders for four months. The task force set up after prime minister Narendra Modi to roll out an ambitious infrastructure push worth ₹100 trillion over the next five years to make India a $5 trillion economy.

The projects spread across 21 ministries and 18 states and Union Territories. The center and states will contribute 39% each of the project cost; private sectors contribute 22% of the cost. The projects included in the pipeline, 43% are under implementation, 33% are at a conceptual stage, and 19% are under development.

The union Government launched a new scheme National Animal Disease Control Programme for FMD and Brucellosis with a financial outlay of Rs. 13,343.00 crore for five years (2019-20 to 2023-24) by vaccinating 100% cattle, buffalo, sheep, goat, and pig population for FMD and 100% bovine female calves of 4-8 months of age for brucellosis to prevent loss of Rs. 50,000 crores. This programme combined with providing unique PashuAadhar to 535 million animals

Nationwide Artificial Insemination Programme district for 600 districts in the country was recently launched by the Government in September is one of the most extensive such programs with 100% central assistance for undertaking breed improvement. T600 districts so that India achieves 70% AI coverage.Under NAIP, more than 11 lakhs AI done on 31.12.2019. 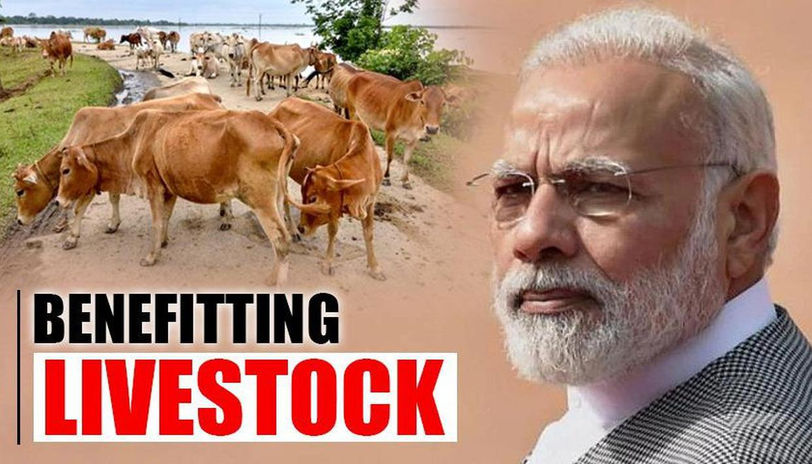