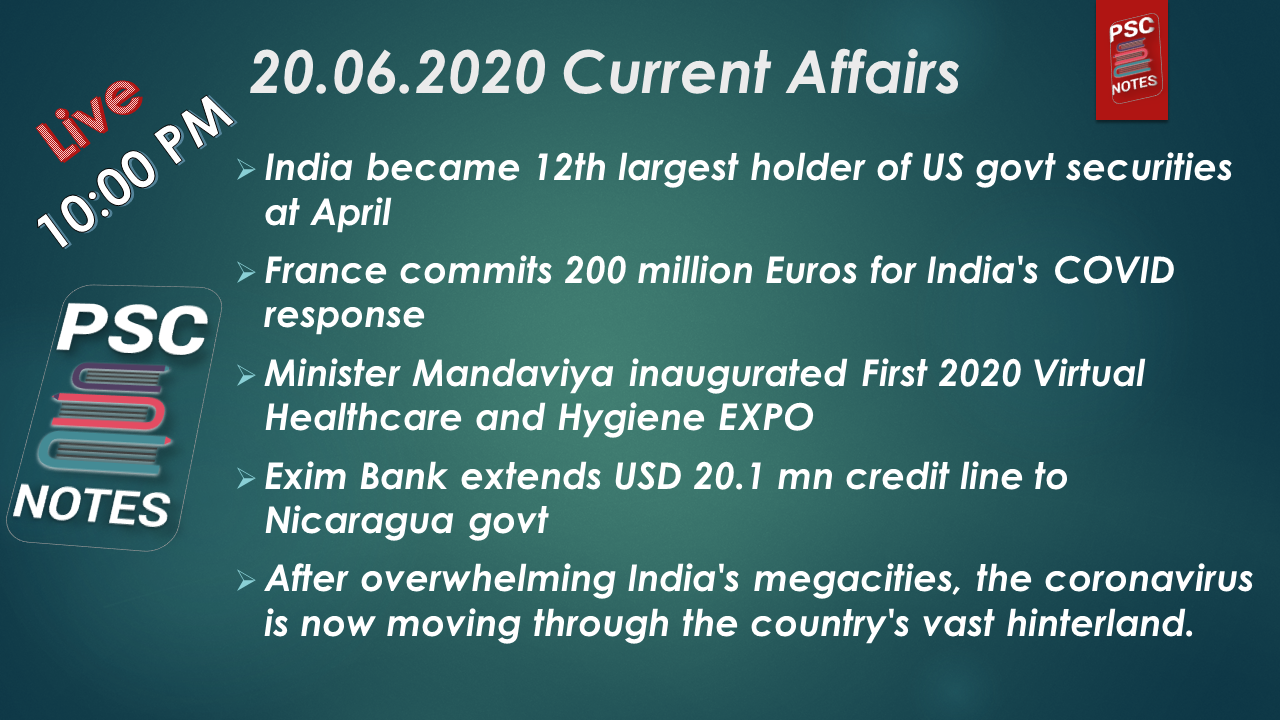 With a view to make Chhattisgarh greener, and with popular involvement, the government on Thursday launched a scheme ‘Paudha Tunhar Duaar’ (Plant at your doorstep).

Public representatives and government officials in various district headquarters flagged off vehicles carrying saplings that will be        delivered home — for free.

In Kabirdham district, which has set a target to plant 9.91 lakh trees.

India became the 12th largest holder of the United States government securities at the end of April. As per the official data, India held securities worth 157.4 billion dollars.

In India, the American government securities are held by the Reserve Bank of India (RBI) as the Central Banks invests in foreign assets as part of its prudential liquidity management.

Through this loan, France will work with India to increase the state and central governments’ capacities to support the country’s most vulnerable people in the wake of the COVID-19 crisis.

The programme design, developed by the World Bank in collaboration with the Indian authorities, seeks to optimize and scale up the Indian Government’s existing social protection measures.

The programme will provide further benefits to low-income families to ensure the health, social and economic shocks arising from Covid-19.

The Expo has been organized by the Federation of Indian Chambers of Commerce & Industry (FICCI).

Virtual Healthcare and Hygiene EXPO 2020 is the first-ever largest virtual exhibition in India.

This is a step that marks that the business will happen virtually as Digital India is now making a way forward.

Export-Import Bank of India (Exim Bank) has extended a line of credit (LOC) of USD 20.10 million to the government of Nicaragua for reconstruction of Aldo Chavarria Hospital.

With signing of this agreement, Exim Bank, so far, has extended four LOCs to Nicaragua, on behalf of the Indian government, taking the total value to USD 87.63 million.

Post the signing of this LOC agreement, Exim Bank has now in place 261 LOCs, covering 62 countries in Africa, Asia, Latin America and the CIS, with credit commitments of around USD 25.70 billion, available for financing exports from India.

New Covid hotspots are emerging in rural villages across India

After overwhelming India’s megacities, the coronavirus is now moving through the country’s vast hinterland.

Home to nearly 70% of India’s 1.3 billion population, the nation’s villages have little access to healthcare and are struggling to support themselves through the country’s prolonged economic slowdown.

Infections have now spread to 98 of the country’s 112 poorest rural districts, up from 34 on April 15, according to the report from NITI Aayog, the government’s planning body. Nearly 2,250 new cases were added in those districts.

About 57 lakh migrants have been shifted to various destinations across the country by special trains and a further 4.1 million by road transport.