Organic farming is an alternative agricultural system which originated early in the 20th century in reaction to rapidly changing farming practices. Organic farming continues to be developed by various organic agriculture organizations today. It relies on fertilizers of organic origin such as compost manure, green manure, and bone meal and places emphasis on techniques such as crop rotation and companion planting. Biological pest control, mixed cropping and the fostering of insect predators are encouraged. In general, organic standards are designed to allow the use of naturally occurring substances while prohibiting or strictly limiting synthetic substances. For instance, naturally occurring pesticides such as pyrethrin and rotenone are permitted, while synthetic fertilizers and pesticides are generally prohibited. Synthetic substances that are allowed include, for example, copper sulfate, elemental sulfur and Ivermectin. Genetically modified organisms, nanomaterials, human sewage sludge, plant growth regulators, hormones, and antibiotic use in livestock husbandry are prohibited. Reasons for advocation of organic farming include advantages in sustainability, openness, self-sufficiency, autonomy/independence, health, food security, and food safety.

Organic farming methods combine scientific knowledge of ecology and modern technology with traditional farming practices based on naturally occurring biological processes. Organic farming methods are studied in the field of agroecology. While conventional agriculture uses synthetic pesticides and water-soluble synthetically purified fertilizers, organic farmers are restricted by regulations to using natural pesticides and fertilizers. An example of a natural pesticide is pyrethrin, which is found naturally in the Chrysanthemum flower. The principal methods of organic farming include crop rotation, green manures and compost, biological pest control, and mechanical cultivation. These measures use the natural environment to enhance agricultural productivity: legumes are planted to fix nitrogen into the soil, natural insect predators are encouraged, crops are rotated to confuse pests and renew soil, and natural materials such as potassium bicarbonate and mulches are used to control disease and weeds. Genetically modified seeds and animals are excluded.

While organic is fundamentally different from conventional because of the use of carbon based fertilizers compared with highly soluble synthetic based fertilizers and biological pest control instead of synthetic pesticides, organic farming and large-scale conventional farming are not entirely mutually exclusive. Many of the methods developed for organic agriculture have been borrowed by more conventional agriculture. For example, Integrated Pest Management is a multifaceted strategy that uses various organic methods of pest control whenever possible, but in conventional farming could include synthetic pesticides only as a last resort. 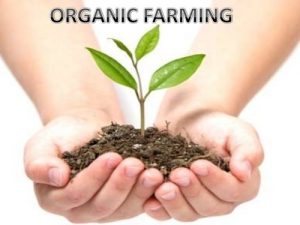 Soil managements Organic farming relies heavily on the natural breakdown of organic matter, using techniques like green manure and composting, to replace nutrients taken from the soil by previous crops. This biological process, driven by microorganisms such as mycorrhiza, allows the natural production of nutrients in the soil throughout the growing season, and has been referred to as feeding the soil to feed the plant. Organic farming uses a variety of methods to improve soil fertility, including crop rotation, cover cropping, reduced tillage, and application of compost. By reducing tillage, soil is not inverted and exposed to air; less carbon is lost to the atmosphere resulting in more soil organic carbon. This has an added benefit of carbon sequestration, which can reduce green house gases and help reverse climate change.

Plants need nitrogen, phosphorus, and potassium, as well as micronutrients and symbiotic relationships with fungi and other organisms to flourish, but getting enough nitrogen, and particularly synchronization so that plants get enough nitrogen at the right time (when plants need it most), is a challenge for organic farmers. Crop rotation and green manure (“cover crops”) help to provide nitrogen through legumes (more precisely, the Fabaceae family), which fix nitrogen from the atmosphere through symbiosis with rhizobial bacteria. Intercropping, which is sometimes used for insect and disease control, can also increase soil nutrients, but the competition between the legume and the crop can be problematic and wider spacing between crop rows is required. Crop residues can be ploughed back into the soil, and different plants leave different amounts of nitrogen, potentially aiding synchronization. Organic farmers also use animal manure, certain processed fertilizers such as seed meal and various mineral powders such as rock phosphate and green sand, a naturally occurring form of potash that provides potassium. Together these methods help to control erosion. In some cases pH may need to be amended. Natural pH amendments include lime and sulfur, but in the U.S. some compounds such as iron sulfate, aluminum sulfate, magnesium sulfate, and soluble boron products are allowed in organic farming.

The economics of organic farming, a subfield of agricultural economics, encompasses the entire process and effects of organic farming in terms of human society, including social costs, opportunity costs, unintended consequences, information asymmetries, and economies of scale. Although the scope of economics is broad, agricultural economics tends to focus on maximizing yields and efficiency at the farm level. Economics takes an anthropocentric approach to the value of the natural world: biodiversity, for example, is considered beneficial only to the extent that it is valued by people and increases profits. Some entities such as the European Union subsidize organic farming, in large part because these countries want to account for the externalities of reduced water use, reduced water contamination, reduced soil erosion, reduced carbon emissions, increased biodiversity, and assorted other benefits that result from organic farming. Traditional organic farming is labor and knowledge-intensive whereas conventional farming is capital-intensive, requiring more energy and manufactured inputs. Organic farmers in California have cited marketing as their greatest obstacle.

Studies comparing yields have had mixed results. These differences among findings can often be attributed to variations between study designs including differences in the crops studied and the methodology by which results were gathered.

A 2012 meta-analysis found that productivity is typically lower for organic farming than conventional farming, but that the size of the difference depends on context and in some cases may be very small. While organic yields can be lower than conventional yields, another meta-analysis published in Sustainable Agriculture Research in 2015, concluded that certain organic on-farm practices could help narrow this gap. Timely weed management and the application of manure in conjunction with legume forages/cover crops were shown to have positive results in increasing organic corn and soybean productivity.