Application of Satellites for different purposes

Despite being a developing economy with its attendant problems, India has effectively developed space technology and has applied it successfully for its rapid development and today is offering a variety of space services globally.

During the formative decade of 1960s, space research was conducted by India mainly with the help of sounding rockets. The Indian Space Research Organisation (ISRO) was formed in 1969. Space research activities were provided additional fillip with the formation of the Space Commission and the Department of Space by the government of India in 1972. And, ISRO was brought under the Department of Space in the same year.

For launching its spacecraft indigenously, India is having a robust launch vehicle programme, which has matured to the state of offering launch services to the outside world. Antrix, the commercial arm of the Department of Space, is marketing India’s space services globally. Fruitful co-operation with other space faring nations, international bodies and the developing world is one of the main characteristics of India’s space programme.

The most significant milestone of the Indian Space Programme during the year 2005-2006 was the successful launch of PSLV-C6. On 5 May 2005, the ninth flight of Polar Satellite Launch Vehicle (PSLV-C6) from Satish Dhawan Space Centre (SDSC) SHAR, Sriharikota successfully placed two satellites – the 1560 kg CARTOSTAR-1 and 42 kg HAMSAT – into a predetermined polar Sun Synchronous Orbit (SSO). Coming after seven launch successes in a row, the success of PSLV-C6 further demonstrated the reliability of PSLV and its capability to place payloads weighing up to 1600 kg satellites into a 600 km high polar SSO.

The successful launch of INSAT-4A, the heaviest and most powerful satellite built by India so far; on 22 December 2005 was the other major event of the year 2005-06. INSAT-4A is capable of providing Direct-To-Home (DTH) television broadcasting services.

Besides, the setting up of the second cluster of nine Village Resource Centres (VRCs) was an important ongoing initiative of the Department of Space during the year. VRC concept integrates the capabilities of communications and earth observation satellites to provide a variety of information emanating from space systems and other IT tools to address the changing and critical needs of rural communities.

In October 2008, the first lunar mission launched by ISRO. The spacecraft, Chandrayaan took off from the Satish Dhawan Space Centre and it operated till August 2009. The project was announced by former PM Atal Bihari Vajpayee, as part of his independence day speech in 2003. The greatest achievement of this lunar project was the discovery of a large number of water molecules in moon. ISRO plans to launch its second lunar mission, Chandrayaan 2 by 2018.

India has been launching heavy satellites on its Geosynchronous Satellite Launch Vehicle (GSLV) but so far it has only been used for domestic satellites.In recent months though, there have been queries from foreign companies for launches on the GSLV.

Application of satellites for different purposes:

Satellites based on application can be categorized as follows:

Starting with IRS-1A in 1988, ISRO has launched many operational remote sensing satellites. Today, India has one of the largest constellations of remote sensing satellites in operation. Currently, *thirteen* operational satellites are in Sun-synchronous orbit – RESOURCESAT-1, 2, 2A CARTOSAT-1, 2, 2A, 2B, RISAT-1 and 2, OCEANSAT-2, Megha-Tropiques, SARAL and SCATSAT-1, and *four* in Geostationary orbit- INSAT-3D, Kalpana & INSAT 3A, INSAT -3DR. Varieties of instruments have been flown onboard these satellites to provide necessary data in a diversified spatial, spectral and temporal resolutions to cater to different user requirements in the country and for global usage. The data from these satellites are used for several applications covering agriculture, water resources, urban planning, rural development, mineral prospecting, environment, forestry, ocean resources and disaster management.

The Indian National Satellite (INSAT) system is one of the largest domestic communication satellite systems in Asia-Pacific region with nine operational communication satellites placed in Geo-stationary orbit. Established in 1983 with commissioning of INSAT-1B, it initiated a major revolution in India’s communications sector and sustained the same later. GSAT-18 joins the constellation of INSAT System consisting 14 operational satellites, namely – INSAT-3A, 3C, 4A, 4B, 4CR, 3DR and GSAT-6, 7, 8, 10, 12, 14, 15 and 16.

This is a Satellite Based Augmentation System (SBAS) implemented jointly with Airport Authority of India (AAI). The main objectives of GAGAN are to provide Satellite-based Navigation services with accuracy and integrity required for civil aviation applications and to provide better Air Traffic Management over Indian Airspace. The system will be interoperable with other international SBAS systems and provide seamless navigation across regional boundaries. The GAGAN Signal-In-Space (SIS) is available through GSAT-8 and GSAT-10.

This is an independent Indian Satellite based positioning system for critical National applications. The main objective is to provide Reliable Position, Navigation and Timing services over India and its neighbourhood, to provide fairly good accuracy to the user. The IRNSS will provide basically two types of services 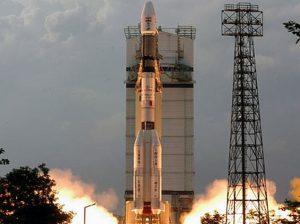 Space Segment consists of seven satellites, three satellites in GEO stationary orbit (GEO) and four satellites in Geo Synchronous Orbit (GSO) orbit with inclination of 29° to the equatorial plane. This constellation of seven satellites was named as “NavIC” (Navigation Indian Constellation) by the Honourable Prime Minister of India, Mr. Narendra Modi and dedicated to the Nation on the occasion of successful launch of IRNSS-1G, the seventh and last satellite of NavIC. All the satellites will be visible at all times in the Indian region. All the seven Satellites of NavIC, namely, IRNSS-1A, 1B, 1C, ID,1E, 1F and 1G were successfully launched on July 02, 2013, Apr 04, 2014, Oct 16, 2014, Mar 28, 2015, Jan 20, 2016, Mar 10, 2016 and Apr 28, 2016 respectively and all are functioning satisfactorily from their designated orbital positions.

The small satellite project is envisaged to provide platform for stand-alone payloads for earth imaging and science missions within a quick turn around time. For making the versatile platform for different kinds of payloads, two kinds of buses have been configured and developed.

Indian Mini Satellite -1 (IMS-1): IMS-1 bus has been developed as a versatile bus of 100 kg class which includes a payload capability of around 30 kg. The bus has been developed using various miniaturization techniques. The first mission of the IMS-1 series was launched successfully on April 28th 2008 as a co-passenger along with Cartosat 2A. Youthsat is second mission in this series and was launched successfully along with Resourcesat 2 on  20th April 2011.

Indian Mini Satellite -2 (IMS-2) Bus: IMS-2 Bus is evolved as a standard bus of 400 kg class which includes a payload capability of around 200kg. IMS-2 development is an important milestone as it is envisaged to be a work horse for different types of remote sensing applications. The first mission of IMS-2 is SARAL.  SARAL is a co-operative mission between ISRO and CNES with payloads from CNES and spacecraft bus from ISRO.

ISRO has influenced educational institutions by its activities like making satellites for communication, remote sensing and astronomy. The launch of Chandrayaan-1 increased the interest of universities and institutions towards making experimental student satellites.