Corruption is widespread in India. India has been ranked 79th out of 176 countries in Transparency International’s 2012 corruption perception index (CPI). Corruption has taken the role of a pervasive aspect of Indian Politics and Bureaucracy. The economy of India was under socialist. Inspired policies for an entire generation from the 1950s until the 1980s. The economy was shackled by extensive regulation protectionism and public ownership, leading to pervasive corruption and slow growth. Since 1991, economic liberalization in India has reduced red type and bureaucracy, supported the transition towards a market economy and transformed the economy with high growth rate. However, although the Indian economy has become the 4th largest in the world, the growth has been uneven across social and economic groups and poverty is still on issue. Endemic and deep rooted corruption is a major factor for most social and political ills. It is a serious threat not just to sustainable economic growth, but also to the sociopolitical fabric of the country.

In Indian civilization, corruption have caused maximum suffering to the humankind. In ancient Indian history the great Indian philosopher Kautilya says “just as it is not possible, not to taste honey or poison put on the surface of the tongue, so it is not possible for the government servant dealing with money not to taste it in however small a quantity.” On the difficulties of corruption detection Kautilya says “just as a fish moving under water cannot possibly be found out either as drinking or not drinking water, so government servant employed in the government works cannot be found out taking money.”

After the independence corruption is widespread in Indian bureaucratic and political system fill lust small point to apex. According to an international report, the much amount of Indian black money deposited in Tax Heaven Foreign banks, if which is come out in India. Then the annual budget of India can be made without tax lies to next 30 years. It is surmisal that the is how much widespread in present India after independence probably that high profile scandal was the jeep scam in 1948, when jeeps were required for the army operation in Kashmir. Other notable scandals includes the Mudgal case (1951), Mundra case (1957 – 58), Malviya – Sirajuddin Scandal (1963).

The governing climate in those days can be gauged from the many observations . A.D. Gorwala committee, set up to suggest ways to improve the system of governance. The Santhanam committee (1962) examine the problem of corruption observed in 1964 that “there is widespread impression that failure of integrity is not uncommon among ministers and that some ministers, who have held office during the last sixteen years have enriched themselves illegitimately, obtained good jobs for their sons and relations through nepotism and have reaped other advantages inconsistent with any notion of purity in public life.” In later years corruption will be gradually widespread in Indian society and no effective measures have yet been installed that curb the menace. The lokpal bill could not be passed in last decades, it speaks for the utter lack of political will in the country.

Prevention of Corruption Act, 1988 (POCA) is India’s principal legislation against corruption. Its main thrust is to prohibit public servants from accepting or soliciting illegal gratification in the discharge of their official functions. In addition, bribe-givers and intermediaries may be held liable under POCA for bribing public officials. However, prosecution under POCA requires prior approval of high authorities which severely limits its usefulness particularly where there is collusive activity within government branches. 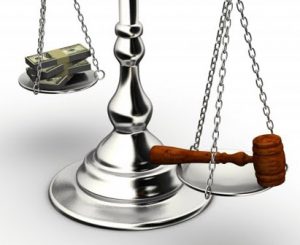 In addition to POCA’s prohibitions, various sections of the Indian Penal Code (IPC) provide criminal punishment for public servants who disobey relevant laws or procedures, frame incorrect or improper documents, unlawfully engage in trade, or abuse their position or discretion.

In order to ensure speedy trial of corruption cases, the Prevention of Corruption Act, 1988 made the following provisions:
a. All cases under the Act are to be tried only by a Special Judges.
b. The proceedings of the court should be held on a day-to-day basis.
c. No court shall stay the proceedings under the Act on the grounds of any error or irregularity in the sanction granted, unless in the opinion of the court it has led to failure of justice.

The 1988 Act enlarged the scope of the term ‘public servant’ and in­cluded a large number of employees within its ambit. Besides the employees of the central government and the union territories, the em­ployees of public undertakings, nationalised banks, office-bearers of cooperative societies of the central and the state government receiving fi­nancial aid, employees of the University Grants Commission (UGC), vice-chancellors, professors, and scientists in institutions receiving finan­cial aid from the central or state governments or even from the local authorities have all been declared as public servants.

Corruption is an age old phenomenon and can be seen everywhere now a days. It is like a cancer in public life, which has not become to rampant and perpetuated overnight, but is course of time. The word corruption means destruction, ruining or spoiling a society or nation. A corrupt society is characterized by immorality and lack of fear or respect for the law. It is the abuse of public power for private gain. Corruption comes under many different guises like bribery, extortion, fraud, embezzlement. misappropriations of public goods, nepotism (favoring family members for jobs and contracts) cronyism and influence pending. Corruption has been defined in many different ways, each lacking in some aspect. A few years ago, the question of definition absorbed a large praportion of the time spent on discussion of corruption at conferences and feelings. However like a elephant, even though it may be difficult to describe, it is generally not difficult to recognize when observeed. Unfortunately, the behaviour is often difficult to observe directly because, typically acts of corruption do no t takes place in broad day light.

In recent years so many major scandals involving high level public officials have shaken the Indian public services. These scandals suggests corruption has become a pervasive aspect of Indian political and bureaucratic system. Some of them major scams are following:

Nature of corruption in India

Under the Indian constitution, the government consists of three branches : the legislative, the executive and the judiciary with clear mandate for independent functioning of each branch. For the good governance it is compulsory that each of these units must function with integrity and efficiency. The legislators are elected representatives of the peoples and responsible for making laws. The executive branch consisting of ministers, bureaucrats and whole government machinery, which is responsible for the implementation of laws made up by legislative assemblies. The judiciary, acts as an impartial watchdog to see if the people are governed as per the law. It lakes the power to frame any law, it can only interpret the laws passed by the law makers under the constitutional framework and give its verdicts. But when corruption invades, governance begins to degrade implying loss of integrity and efficiency both. Now – a – days corruption is widespread in every segment of Indian government system and politics.

The behaviour of India legislators both at the union and in the state leaves a lot to be desired. Every time they act motivated by personal gain. Corruption in the assemblies as seen from this perspective implies floor crossing, case for vote taking money or other benefits to ask questions, framing rules under the influence of big corporate houses at the cost of common people. Criminalization of politics is yet another fact of corruption in the current parliament. These are over a quarter MPs with criminal records. Many with serious charges against them. It also highlights an area where electoral reforms is urgently needed so that criminals don’t enter in the parliament or state assemblies.

In the executive branch, ministers are placed at top of the hierarchy. They are responsible for the making policies for the public because the public trust on them and elected by votes to making government. In recent analysis we seen that the level of corruption in ministers is highest. 2G spectrum scam, coal allotment scam, commonwealth games scam, fodder scam etc. are the best examples of it.

In Indian parliamentary system, the responsibility of execution of the policies making by government at ground level is taking hand over to the bureaucracy. But the report card of the Indian bureaucracy is also not very flattering. Bureaucratic corruption in India thrives on red tape, complicated procedures and discretionary power. Governance in India is characterized by the lack of transparency in rules. Complicated procedures and a bureaucracy that enjoys broad discretionary power. According to a recent analysis of reports of bribery demands.

in India conducted by trace international was published in January 2009, 90% demand for bribe came from government officials of which over 65% for avoiding harassment, 50% bribery was for timely delivery of services to which the individuals were already entitled, about 10% were meant to provide any advantage. Bureaucratic corruption pervades the Indian administration system with widespread practices of bribery, nepotism and misuse of official positions and resources.

Causes Of Corruption In India