Writs under Article 32 of the Constitution

Writs under Article 226 of the Constitution

From the point of view of the writ jurisdiction, the High Courts did not enjoy a co-equal status in the pre-constitutional era. No high Court except, the High Courts of Calcutta, Madras and Bombay, had any inherent power to issue the prerogative writs. The three High Courts enjoyed this power as inheritors of the jurisdiction of their predecessors. Now every High Court has power to issue various writs under Article 226 of the Indian Constitution of India. The High courts have a parallel power under Article 226 to enforce the fundamental rights. Article 226 differs from Article 32 in that whereas Article 32 can be invoked only for the enforcement of Fundamental Rights, Article 226 can be invoked not only for the enforcement of Fundamental Rights but for any other purpose as well.This means that the Supreme Courts power under Article 32 is restricted as compared with the power of a High Court 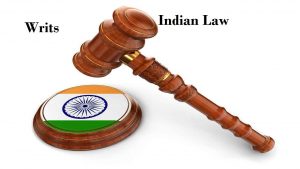 Habeas corpus is a recourse in law through which a person can report an unlawful detention or imprisonment to a court and request that the court order the custodian of the person, usually a prison official, to bring the prisoner to court, to determine if the detention is lawful. The writ of habeas corpus is known as “the great and efficacious writ in all manner of illegal confinement”,being a remedy available to the meanest against the mightiest. It is a summons with the force of a court order; it is addressed to the custodian (a prison official, for example) and demands that a prisoner be taken before the court, and that the custodian present proof of authority, allowing the court to determine whether the custodian has lawful authority to detain the prisoner. If the custodian is acting beyond his or her authority, then the prisoner must be released. Any prisoner, or another person acting on his or her behalf, may petition the court, or a judge, for a writ of habeas corpus. One reason for the writ to be sought by a person other than the prisoner is that the detainee might be held incommunicado. Most civil law jurisdictions provide a similar remedy for those unlawfully detained, but this is not always called habeas corpus. For example, in some Spanish-speaking nations, the equivalent remedy for unlawful imprisonment is the amparo de libertad (“protection of freedom”).  Habeas corpus has certain limitations. Though a writ of right, it is not a writ of course.[Note 2] It is technically only a procedural remedy; it is a guarantee against any detention that is forbidden by law, but it does not necessarily protect other rights, such as the entitlement to a fair trial. So if an imposition such as internment without trial is permitted by the law, then habeas corpus may not be a useful remedy. In some countries, the writ has been temporarily or permanently suspended under the pretext of war or state of emergency.

Mandamus was introduced in India by the Letters Patent creating the Supreme Court in Calcutta in 1773. The Supreme Courts in the Presidency towns were empowered to issue the writ. In 1877, the Specific Relief Act substituted an order in the nature of mandamus in the place of the writ of mandamus for the purpose of “requiring any specific act to be done or forborne within the local limits of its ordinary civil jurisdiction by any person holding a public office.

Mandamus lies against authorities whose duty is to perform certain acts and they have failed to do so. Under following circumstances mandamus can be issued :

It will not issue against a private individual to enforce a private right such as a contract17.Even though mandamus does not lie to enforce a contract inter partes, it will lie where the petitioner’s contractual right with a third party is interfered with by the State18. Mandamus will not issue to enforce departmental manuals or instructions not having any statutory force which do not give rise to any legal right in favour of the petitioner as in the cases of Raman & Ramanv. State of Madras, A.l.R. 1959 S.C. 694; State of Assam v. Ajit Kumar, A.l.R. 1965 S.C. 1196.  However if the authority were under law obliged to exercise discretion, mandamus would lie to exercise it in one way or the other. Mandamus can be issued to compel an income-tax officer to carry out the instructions issued by income-tax appellate tribunal exercising its appellate power. Again it can be issued to a municipality to discharge its statutory duty.

Literally, Certiorari means to be certified. The writ of certiorari can be issued by the Supreme Court or any High Court for quashing the order already passed by an inferior court, tribunal or quasi judicial authority.

There are several conditions necessary for the issue of writ of certiorari .

The Writ of prohibition means to forbid or to stop and it is popularly known as ‘Stay Order’. This writ is issued when a lower court or a body tries to transgress the limits or powers vested in it. The writ of prohibition is issued by any High Court or the Supreme Court to any inferior court, or quasi judicial body prohibiting the latter from continuing the proceedings in a particular case, where it has no jurisdiction to try. After the issue of this writ, proceedings in the lower court etc. come to a stop.

Difference between Prohibition and Certiorari:  While the writ of prohibition is available during the pendency of proceedings, the writ of certiorari can be resorted to only after the order or decision has been announced. Both the writs are issued against legal bodies.

The word Quo-Warranto literally means “by what warrants?” or “what is your authority”?

It is a writ issued with a view to restrain a person from holding a public office to which he is not entitled. The writ requires the concerned person to explain to the Court by what authority he holds the office. If a person has usurped a public office, the Court may direct him not to carry out any activities in the office or may announce the office to be vacant. Thus High Court may issue a writ of quo-warranto if a person holds an office beyond his retirement age.

Conditions for issue of Quo-Warranto:

“If I was asked to name the particular Article in this Constitution as the most important without which this Constitution would be a nullity, I could not refer to any other Article except this one. It is the very soul of the Constitution and the very heart of it …….. This in my judgment is one of the greatest safeguards that can be provided for the safety and security of the individual.“- Dr.Ambedkar.