Concept of State and Sovereignty

The State is a social contract, a guarantee of social order in exchange for which the citizens agree to reduce their freedom.According to Carré de Malberg, one of France’s leading constitutional scholars, « the state is a community of men attached to a territory with an organization, from which results for the group engaged in relations with its members a supreme power of action and coercion.” More clearly, the state is the result of a population, a territory and a sovereignty.

First, the population consists of all the persons living in the territory of the State, under its authority. This is linked to the idea of territory and not of nationality. There are states like Switzerland for example which are multicultural. As regards the right of distinct nationalities to a state, there is a whole debate about the right of peoples to self-determination. The UN Charter’s Article 1, paragraph 2, 1945 and the General Assembly Resolution 1514 of 14 December 1960 seeks to clarify precisely this issue, and it can be argued that today this right is being exercised by national minorities in places such as Crimea.

The territory is the idea of a safe space in which the state is expressed. It goes back to the idea of the social contract whereby some degree of personal freedom is exchanged for the safety offered by the state. However, there are territories without states, such as Antarctica, which was internationalized in 1959.  Three are three dimensions 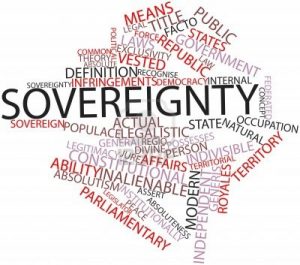 associated to territory: the earth dimension, the aerial dimension and the maritime dimension. As regards borders, they can be natural, such as mountains and rivers, or artificial. The Love River between China and the USSR has changed the course of its bed and this move has opened a conflict. The concept of borders was developed by cartographers in the XVI century. The notion of the state also appeared around this time.

Finally, sovereignty is the existence of a political organization that exercises its authority over the territory and the population. The concept has been theorized by the jurist Jean Bodin. The state is home to the sovereign power. This is what differentiates the state from the society.

States may be classified as sovereign if they are not dependent on, or subject to, any other power or state. Other states are subject to external sovereignty or hegemony where ultimate sovereignty lies in another state. A federated state is a territorial and constitutional community forming part of a federation. Such states differ from sovereign states, in that they have transferred a portion of their sovereign powers to a federal government.

The concept of the state is different from the concept of government. A government is the particular group of people that controls the state apparatus at a given time. In other words, governments are the means through which state power is employed; for example, by applying the rule of law. The rule of law is a legal maxim whereby governmental decisions are made by applying known legal principles. The rule of law is rule not by one person, as in an absolute monarchy, but by laws, as in a democratic republic; no one person can rule and even top government officials are under and ruled by the law.

The concept of the state is also different from the concept of a nation, which refers to a large geographical area, and the people therein who perceive themselves as having a common identity. The state is a political and geopolitical entity; the nation is a cultural or ethnic entity. The nation state is a state that self-identifies as deriving its political legitimacy from serving as a sovereign entity for a nation as a sovereign territorial unit. The term nation state implies that the two geographically coincide.

Sovereignty, in political theory, the ultimate overseer, or authority, in the decision-making process of the state and in the maintenance of order. The concept of sovereignty—one of the most controversial ideas in political science and international law—is closely related to the difficult concepts of state and government and of independence and democracy. Derived from the Latin term superanus through the French term souveraineté, sovereignty was originally meant to be the equivalent of supreme power. However, in practice it often has departed from this traditional meaning.

In 16th-century France Jean Bodin (1530–96) used the new concept of sovereignty to bolster the power of the French king over the rebellious feudal lords, facilitating the transition from feudalism to nationalism. The thinker who did the most to provide the term with its modern meaning was the English philosopher Thomas Hobbes (1588–1679), who argued that in every true state some person or body of persons must have the ultimate and absolute authority to declare the law; to divide this authority, he held, was essentially to destroy the unity of the state. The theories of the English philosopher John Locke (1632–1704) at the end of the 17th century and the French philosopher Jean-Jacques Rousseau (1712–78) in the 18th century—that the state is based upon a formal or informal compact of its citizens, a social contract through which they entrust such powers to a government as may be necessary for common protection—led to the development of the doctrine of popular sovereignty that found expression in the American Declaration of Independence in 1776.

Another twist was given to this concept by the statement in the French constitution of 1791 that “Sovereignty is one, indivisible, unalienable and imprescriptible; it belongs to the Nation; no group can attribute sovereignty to itself nor can an individual arrogate it to himself.” Thus, the idea of popular sovereignty exercised primarily by the people became combined with the idea of national sovereignty exercised not by an unorganized people in the state of nature, but by a nation embodied in an organized state. In the 19th century the English jurist John Austin (1790–1859) developed the concept further by investigating who exercises sovereignty in the name of the people or of the state; he concluded that sovereignty is vested in a nation’s parliament. A parliament, he argued, is a supreme organ that enacts laws binding upon everybody else but that is not itself bound by the laws and could change these laws at will. This description, however, fitted only a particular system of government, such as the one that prevailed in Great Britain during the 19th century.

Austin’s notion of legislative sovereignty did not entirely fit the American situation. The Constitution of the United States, the fundamental law of the federal union, did not endow the national legislature with supreme power but imposed important restrictions upon it. A further complication was added when the Supreme Court of the United States asserted successfully in Marbury v. Madison (1803) its right to declare laws unconstitutional through a procedure called judicial review. Although this development did not lead to judicial sovereignty, it seemed to vest the sovereign power in the fundamental document itself, the Constitution. This system of constitutional sovereignty was made more complex by the fact that the authority to propose changes in the Constitution and to approve them was vested not only in Congress but also in states and in special conventions called for that purpose. Thus, it could be argued that sovereignty continued to reside in the states or in the people, who retained all powers not delegated to the United States by the Constitution or expressly prohibited by it under the terms of the Constitution’s Tenth Amendment. Consequently, the claims by advocates of states’ rights that states continued to be sovereign were bolstered by the difficulty of finding a sole repository of sovereignty in a complex federal structure; and the concept of dual sovereignty of both the union and the component units found a theoretical basis. Even if the competing theory of popular sovereignty—the theory that vested sovereignty in the people of the United States—was accepted, it still might be argued that this sovereignty need not be exercised on behalf of the people solely by the national government but could be divided on a functional basis between the federal and state authorities.