Democracy in modern usage, is a system of government in which the citizens exercise power directly or elect representatives from among themselves to form a governing body, such as a parliament. Democracy is sometimes referred to as “rule of the majority”. Democracy is a system of processing conflicts in which outcomes depend on what participants do, but no single force controls what occurs and its outcomes.

Since the time of the ancient Greeks, both the theory and the practice of democracy have undergone profound changes, many of which have concerned the prevailing answers to questions 1 through 3 above. Thus, for thousands of years the kind of association in which democracy was practiced, the tribe or the city-state, was small enough to be suitable for some form of democracy by assembly, or “direct democracy.” Much later, beginning in the 18th century, as the typical association became the nation-state or country, direct democracy gave way to representative 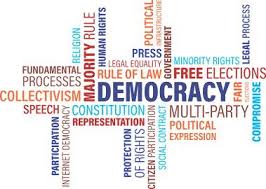 democracy—a transformation so sweeping that, from the perspective of a citizen of ancient Athens, the governments of gigantic associations such as France or the United States might not have appeared democratic at all. This change in turn entailed a new answer to question 3: Representative democracy would require a set of political institutions radically different from those of all earlier democracies.

Direct democracy, also called pure democracy, forms of direct participation of citizens in democratic decision making, in contrast to indirect or representative democracy, based on the sovereignty of the people. This can happen in the form of an assembly democracy or by initiative and referendum with ballot voting, with direct voting on issues instead of for candidates or parties. Sometimes the term is also used for electing representatives in a direct vote as opposed to indirect elections (by voting for an electing body, electoral college, etc.) as well as for recalling elected officeholders. Direct democracy may be understood as a full-scale system of political institutions, but in modern times, it means most often specific decision-making institutions in the broader system environment of representative democracy.

Normative theory of direct democracy still rests basically on popular sovereignty, freedom, and political equality, with Jean-Jacques Rousseau as the outstanding theorist of unanimous consent of the people for a free republican constitution and subsequent forms of participation. During the 19th century, these principles were increasingly challenged, or they were deprived of their substance beyond representative institutions. So, in many countries, direct-democratic institutions have not been established or implemented since representative elites developed a strong interest in monopolizing power. In addition, pragmatic theories contended that direct democracy could not work under space and time conditions of large modern states.

With this background of historical and theoretical restrictions, the normative theory of direct democracy cannot exclusively rest on popular sovereignty, which is also claimed by representative democracy. More specific arguments originate from the participatory theory of democracy and the critique of a lack of responsiveness and legitimacy of representative (party) democracy.

Advantages of representative democracy, especially as opposed to direct democracy, include that the people cannot be expected to have the time or interest to make important and regular decisions, representatives can educate the public on political issues, representatives ensure the interests of all sections of society (including minorities) are taken into account, and can be held accountable for their decisions. Finally, representatives are able to ‘aggregate’ the differing demands of people into a more coherent and politically logical programme.

Disadvantages of representative democracies include that representatives may distort peoples’ demands to suit their political preferences, may not make make themselves accountable enough between elections and can only be removed by elections if they lose the respect of the people. The electoral mandate representatives is flawed, as voters have to accept or reject a whole manifesto, not being able to make clear which parts of it they oppose, and there is more information in this day and age for people to be able to make better decisions. Representatives also have to decide whether to be ‘delegates’ for their constituents, merely putting forward their view, or using their best judgement to ‘represent’ their constituents (a concept called ‘Burkean representation’).