Malhar is a small town situated in Bilaspur district of Chhattisgarh, India. It has archaeological significance. It is 40 km away from Bilaspur by road.

In Malhar, many ancient temples have been found, such as the Pataleshwar temple, the Devri temple & the Dindeshwari temple. Ancient deposits and Jain memorials were also found here. The four handed idol of Vishnu is significant. The remains found here are of the period from approximately 1000 BC to the Ratnapura Kalachuri regime. Temples of the 10th and 11th centuries are also conspicuous. Among them, the Pataleshwar Kedar temple is one, where the Gomukhi Shivling is the main attraction. The Dindeshwari temple of the Kalachuri regime is also significant. Artistic idols are present in the Deor temple. There is also a museum in Malhar, being managed by the Government of India, having a good collection of old sculptures.  Malhar is in the list of “Ancient Monuments and Archaeological Sites and Remains of National Importance” maintained by the Archaeological Survey of India.

Sirpur is located on the banks of River Mahanadi it was almost fifty years ago when the first inscription was found from the area which talked about the presence of Shiva temple in the vicinity. However, it was only in the early 2000 that work 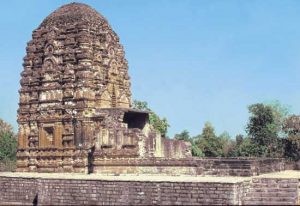 actually began to excavate the area and what the archaeologists found changed not just our understanding of the region, but also about the evolution of temple architecture both here as well as in South India.

Some of the discoveries made here have completely baffled the historians and has helped understand the history of the region and the religions much better. For instance, the Buddha Vihara found here is believed to be four times larger than the famed Nalanda university in Bihar, which is quite an important discovery.

The mythological history of the state of Chhattisgarh in the central part of India can be traced back to the days of Mahabharata and the Ramayana.  Chhattisgarh has a number of very important archaeological sites, historical palaces, forts and some magnificent Chhattisgarh temples. This region of India has witnessed rise and fall of many great dynasties and kingdoms.

It is known that earliest human settlements in Chhattisgarh were established much before they came into existence in any other part of the country, but the exact date for the earliest human settlement in this region is still unknown.  Last year, a 2,500-year-old planned city in Tarighat, Chhattisgarh, India equipped with water reservoirs, roads, seals and coins, buried 20ft below the ground, was discovered by archaeologists. The site was destroyed by a large fire that took place around the 2nd century BC.

numerous Indo-Greek coins were discovered, along with more than 15 varieties of beads found in large number in almost 2,000 unusual sizes, styles and shapes, which suggests that Chhattisgarh served as a significant bead manufacturing centre. Pendants, ornaments, bangles of gold, silver and copper have also been unearthed.

Raipur has been in existence since the 9th century; the old site and ruins of the fort can be seen in the southern part of the city. Raipur district is important historically and as a point of interest archaeologically. This district was once part of the Dakshina Kosala Kingdom and later became part of the Maurya Empire. In the 4th century CE, Gupta king Samudragupta conquered this region and established Gupta domination in the region until the fifth and sixth centuries when the area came under the rule of Sharabhpuriya kings. For some time in the fifth and sixth centuries, Nala kings dominated this area. Later on Somavanshi kings took control and ruled with Sirpur as their capital. Mahashivgupta Balarjun was the mightiest emperor of this dynasty. His mother, the widow queen of Harshgupta of the Somavansh, Rani Vasata built the brick temple of Lakshman.

The Kalachuri dynasty of Tumman ruled the area for a long period, making Ratanpur their capital. The old inscriptions of Ratanpur, Rajim and Khallari refer to the reign of Kalachuri kings. Raipur was the capital of a branch of the Kalachuri dynasty, whose rulers controlled the forts of Chhattisgarh for a considerable period.

It’s a megalithic burial site near Balod, Chhattisgarh. Though from a distance the entire ground looks like a tumble of big rocks in disarray, close inspection reveals a design: the layers of boulders around the menhirs can be found to be arranged in a pyramidal design gradually peaking at the top. These menhirs were further placed inclining towards the east or the west.

This site is located 21 km from Balod on Balod-Dhamtari road. About 500 megaliths were located during the excavations conducted by Late M.G. Dikshit in 1956-57. He classified the megalithic into four types, Type I to Type IV. These are mostly menhirs, of small and large proportions, kept in position by means of buttresses of large boulders. Some of the megaliths were excavated and human skeleton remains, objects of beads and glass bangles were recovered. One of the Chambers even contained a copper vessel. Here also several megalithic monuments (carin circles or menhirs) have disappeared because of quarrying operations.