In 1818 Chhattisgarh came under some sort of British control for the first time. In 1854, when the province of Nagpur lapsed to the British government, Chhattisgarh was formed into a deputy commissionership with its headquarters at Raipur. The British made certain changes in the administrative and revenue systems of Chhattisgarh, which adversely affected the people of Chhattisgarh. The intrusion of the British was resisted strongly in Bastar by the tribals and others part of Chhatisgarh and it continues till 1947.

Cause of the Rise of  National Movement in Chhatisgarh:-

Following are the causes by which national consciousness develop in Chattisgarh such as:- Exploitation of local peasants, occuring of severe Famine of this region, to save from conversion of Christian Missionaries. Contribution for the development of national consciousness by Pt. Sundarlal sharma, Thakur pyarelal singh, Shri Madhavrao, Shri Medhawale.

The First war of independence in 1857 was spearheaded in Chhattisgarh by Vir Narayan Singh who was a benevolent jamindar of Sonakhan. He became the first martyr from Chhattisgarh in the War of Independence. Vir Narain Singhs martyrdom has been resurrected in the 1980s and he has become a potent symbol of Chhattisgarhi pride. Bastar was actively involved in the First Freedom Struggle of India in the year 1857. Bastar was an integral part of one of the earliest movements of independence.

The tribal dominated state of Chhattisgarh has a rich historical background. The state has witnessed many tribal rebellions over the years. This had started during the eighteenth century and continued till a few decades of the twentieth century. Few of these rebellions involved local tribes but the rest were large-scale agitations. Some of the important Chhattisgarh Rebellions are: –

Koi revolt is an important mass uprising among the tribal people in the region of Bastar. The rebellion was formed to stand against the autocratic and domineering British rule. This significant revolt in the history of Chhattisgarh, which is known as Koi revolt, took place in the year 1859. The tribal people declined to accept the decision of the British, which offered the contracts of cutting of Sal trees to people outside the region of Bastar. The contractors from Hyderabad were offered the deal of cutting the Sal trees in the region of Bastar. The people of the Jamindaris, who were involved in the cutting of trees, were known as Kois, which subsequently became the name of the revolution. The contractors who were offered the contract of cutting the trees were also known to exploit the innocent tribal people in many ways. When the water rose above their heads, the tribal people called for the Koi revolution in Bastar. They collectively decided that they would not tolerate the cutting of a single tree. The British wanted to suppress the unrest and used various methods to stop the opposition led by the tribal people. But this time, the tribal people were very steadfast in their decision. They would not allow the exploitation of their natural resources and rich forests.

It took place in the region of Bastar. The revolt of Maria Tribe was a prolonged rebellion, as long as twenty years. The Maria Revolution lasted for a very long time, from the years 1842 to 1863. It was apparently fought to preserve the practice of human sacrifice. Although it seems very inhuman to fight for such a cause that involves killing of human practice, the tribal people had no other option other than this. There were series of invasion by the Marathas and the British. The combined reign of the Marathas and the British made it almost impossible for the tribal people to restore their individuality and originality. The Anglo-Maratha Rule forced the aboriginal tribes to part with their tribal faiths and practices. The British and the Marathas used to enter the temples constantly, which according to the innocent beliefs of the tribal people polluted the sacred atmosphere of the temples. The only way to save the identity of the Marias was to revolt against the invaders. The Maria Rebellion is considered one of the major tribal rebellions. 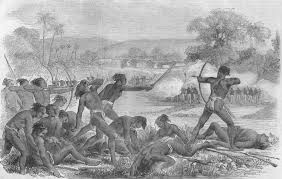 Muria rebellion is another revolt that appeared in the region of Bastar. The Muria rebellion started in the year 1876. In the year 1867, Gopinath Kapardas was selected as the Diwan of the state of Bastar. Gopinath Kapardas used to exploit the simple and innocent tribal people. Being unable to cope up with the atrocities of the Diwan, the tribal people appealed to the King to remove the Diwan from the position but the King did not support His subjects. This went on for a long time and when they were repeatedly neglected, they were left with only one option, that of revolt. Fuming with anger, the aboriginals started the Muria people’s revolution. On 2 March of the year 1876, the raging tribal people enclosed Jagdalpur, the abode of the King. The Muria people besieged the King and blocked all the ways of exit. Surrounded by all sides, the King faced real inconvenience to inform the British about the unrest that had generated among the tribal people. Much later, the British Army was sent which rescued the king and suppressed the revolution of the justice seeking tribal people.

The year 1825 was an eventful one for the Abujhmarias, who were the inhabitants of the present day state of Chhattisgarh. The revolt of Paralkot was an expression of the resentments piled up in the minds of the Abujhmarias against the foreign attacks. The anger was mainly against the foreign rulers Marathas and British. An Abujhmaria, Gend Singh, led the revolt of Paralkot and the other fellow Abujhmarias supported him. The purpose of this rebellion was to acquire a world that is free of all evils. The foreign decree put the individuality of the native tribes at stake and the Abujhmarias stood against this. The Marathas levied heavy tax on the native people, which was impossible for them to pay. They revolted against the injustice done to them by the foreign powers. It was their desire to build a Bastar, free of foreign intrusion.

Tarapur rebellion is one more revolt in which the common people of Bastar stood against the foreign rulers. The revolt of Tarapur took place from 1842 to 1854. The native people of Bastar felt that their local tradition and culture were being considerably harmed and the social, political as well as economical principles were being hampered. Thus, they stood against the Anglo-Maratha reign in order to restore their native culture. The tribal people were charged heavy taxes and were forced to pay the taxes. The local Diwan, who used to collect the taxes from the common people, became the symbol of oppression for them. Most of the anger precipitated on the local Diwan as the higher authorities were out of their reach. The tribal rage grew more and more, resulting in the Tarapur rebellion.

The event of Halba rebellion took place in the area of the Bastar District in Chhattisgarh. It created everlasting alteration in the Bastar District. After the decline of the Chalukyas, the situations were such that both the Marathas and the British came one after the other, to the place in order to rule. The Halba rebellion started against them in the year 1774. The then governor of Dongar, Ajmer Singh, was the initiator of the revolt of Halba. The revolution of Halba was started with the desire of forming a new and independent state in Dongar. The Halba tribe as well as the soldiers stood beside Ajmer Singh. The main reason behind the revolt was lack of money and food in the hands of the common people. A long drought had affected the people especially those who had very little cultivable land in their hands. Added to this severe problem, there was the pressure and fear caused by the Maratha and the British on the commoners, which eventually resulted in the uprising. The British armies and the Marathas suppressed them and in a massacre, many of the Halba tribal people were killed. Subsequently, the army of Halba was also defeated.

Contribution of Chhattisgarh In Freedom Movement

During the national movement in Chattisgarh at different periods jangal Satyagrah occured at different places such as Silhava-Nagari, Gattasili, Rudri-Nawagaon, Mahasamund, Durg. All these Jangal Satyagrah’ were successfully led by the leaders of these areas and many people participated in it.

Non-cooperation Movement was started by Gandhiji in 1920 and he put fourth various programs which were set up for protest of British Goverment. In Chhatisgarh too it started as the Kandel nahar Aandolan from dhamtari. In order to make it successful in this connection Gandhiji first arrived to Chhatisgarh in 1920. During the arrival of Gandhiji in Chattisgarh various programs were successfully conducted by the leaders of Chhattisgrah.

In 1930 when the Civil Disobedience Movement was started by Gandhiji, it affected the Chhatisgarh too. In Chhatisgarh mainly in Raipur where Pt. Ravishankar Shukla started it by making salt, and in Dhamtari it started in the form of Jangal Satyagrah as well in Gattasili, Rudri-Nawagaon, Mahasamund, Durg, Bilaspur.. in these places also various leaders disobeyed and broke the British rules and regulations. In 1931 for some time because of Gandhi-Irwin pact it was stopped but from 1932 again it started second time and continued till 1934.

After the failure of Cripps Mission, the Quit India resolution was passed in the Congress Session of Bombay 1942. During this time Gandhiji gave the famous slogan “Do or die”. In 1942 as soon as Gandhiji started the Quit India Movement, it affected the Chhatisgarh region also. In Chhatisgarh in the same year at various places mainly in Raipur, Bilaspur and Durg this movement was led by the different leaders such as Ravishankar, Chedilal Singh, Shri Raghunandan Singraul, in order to protest the works  of British Goverment.

Role of Pt. Ravishankar Shukla in The National Movement in Chhatisgarh –

Pt. Ravishankar Shukal was born in Sagar in 1877 and from 1907 onwards started to live in Raipur. From 1907 onwards till his last breath 1956 he gave his whole life in order to set free the nation. In the various national level movements i.e. Home-Rule movement 1916, Non-Cooperation movement, president of Raipur Congress district Committee 1920, representative of Jhanda-Satyagraha 1923, contribution in Civil Disobedience movement 1930, contribution in Quit India Movement 1942. He became Chief-Minister of M.P. in 1956.

Role of Er. Raghvendra Rao in National Movement in Chattisgarh:-

Er. Rao was one of the most powerful leaders of Chattisgarh, played a prominent role in the National movement in Chattisgarh. He was born in 1889 in Bilaspur and acheived higher Degree from London. Returning Back to bilaspur from london, he participated in the various national movements which were going that time  in the nation and in Chhatisgarh region for the development of national consciousness among the people. From 1915 till 1941 he was elected as well assigned  in various posts.