The State has also launched a ‘Solar Community Irrigation Project’ for drawing water extracted using solar pumps for supplying to the agricultural land of farmers across the State. 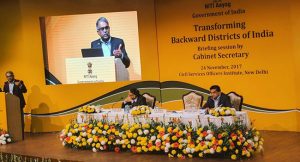