Fairs and festivals of Chhattisgarh 3

The Chakradhar Festival in Raigarh is celebrated every year during Ganesh Chaturthi. The date of this musical fiesta is fixed on the basis of the Hindu calendar. It approximately corresponds to either the month of September or October of the Gregorian calendar.

Chakradhar Samaroh at Raigarh is jointly organized by Chakradhar Lalit Kala Kendra and Ustad Allaudin Khan Sangeet Academy, with the sturdy co-operation of the District Administration. This festival pays homage to the memory of the illustrious King and Musician Chakradhar Singh. It was largely due to the painstaking efforts of Maharaja Chakradhar Singh that Raigarh became famous as Chhattisgarh’s cultural capital.

Each year at Raigarh Chakradhar Samaroh, dancers as well as musicians come from different parts of India in order to exhibit their talents. It is a magnificent opportunity for these performers to showcase their endowments. Chakradhar Festival in Chhattisgarh would offer you the wonderful chance to observe the programs put forward by several stalwarts at the same time. The exceptional caliber possessed by these performers is quite apparent in their feats. Festivals like these mirror the rich cultural legacy of our country.

Folk artistes also form an essential part of this festival held in Raigarh. The functions comprise of outstanding performances by these folk artistes too. It would not be an overstatement to say that you will remain impressed and enchanted by the shows presented at this Raigarh event. Enjoyable and enthralling at the same time, the performances at Chakradhar Samaroh, Raigarh would transfer you to an entirely different musical world. One’s interest and curiosity in the arena of performing arts would get a huge boost subsequent to a visit to this Chakradhar Samaroh of Raigarh.

Charta Festival is the harvest festival of Chhattisgarh. The festival is celebrated in Koriya district of the state. Charta festival falls on the poornima or full moon day of the Hindu month of Paush in December end or beginning of January.

The festival is celebrated by all tribal communities in the region. The festival is marked by the grand feast on the banks of near by water bodies. All people eagerly wait for the most awaited festival. Celebration begins from the morning by the preparation of special mid day meal at their home. Later in the day, kids of the village gather and move to different houses for collecting rice grains. The collection is later cooked by married females of the society on the banks of water bodies, which is enjoyed and eaten as a grand feast.

The festivity is marked by the joyous ambience created by the dancing and singing population of the region while waiting for the grand feast.

Charta Festival is the harvest festival of Chhattisgarh. The festival is celebrated in Koriya district of the state. Charta festival falls on the poornima or full moon day of the Hindu month of Paush in December end or beginning of January.

Navakhana Festival is a popular festival of Chhattisgarh which is celebrated every year in the month of Bhadrapad. This festival is celebrated by all the communities and announces the harvesting of rice crop. During the festival the newly harvested rice is offered to the family deity on the 9th day (Navami ) of Bhadrapad month. At some communities dance programs are also organized at the night after consuming the newly harvested rice. 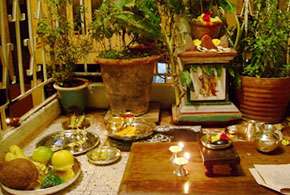 Navakhana is the post harvest festival of Chhattisgarh and celebrated every year in the Hindu month of Bhadrapad or Bhadav (September). Navakhana falls on the bright fortnight of 9th day or Navmi of Bhadav by the Gond tribe.

This festival marks the harvest of rice crop. People present the new harvested crop and liquor as offering before the family deity. Presenting new rice grains and eating dish prepared by the dame is considered very auspicious in the region. Communal dance programs are also organized at night.

This festival is dedicated to the worship of Mother Earth but has nothing to do with the harvest. The festive celebrations are held after the blooming of Sal trees. During this festival nobody touches the fields throughout the day and the farmers offer prayers at a small forest within the village.

Chhattisgarh is a state that is acclaimed for a large number of reasons. The state is not just a thriving focal point of modern undertaking with rich mineral assets, it additionally possesses large amounts of social events. The social blend of Chhattisgarhi Cultures is showed in its various fairs of which the Earth Festival merits extraordinary notice. The general population of Chhattisgarh rely on upon a fundamentally agrarian economy. The nearby tenants are a profoundly religious and superstitious part who solidly have faith in worshiping Mother Earth. Without the liberal blessing of Mother Earth, the grounds would not turn a fruitful cocoa and yield stores of ready, brilliant product.

Actually, they expect that on maddening the prolific area, the wellspring of their wage dry seasons and starvation would strike the state and brownish fixes and breaks and gaps would develop on the ripe fields that would take after the cover up of a panther. In this manner the tribal occupants of Chhattisgarh praise the Earth Festival with pageantry and greatness. Otherwise called the Surhul Festival or the Mati Puja, the merry festivals begin in the excellent and happy months of spring. Amid the months of March and April, nature is brilliant in its crisp abundance and the lively hues and new trusts and guarantees lift the spirits of the workers and the yeomen.

Surhul or Earth celebration festivities are totally isolated from harvest of yields. A religious celebration in soul, the celebration is essentially worried with worshiping the revered Mother Earth. The general population enthusiastically and quietly anticipate the favorable day when the Sal trees are secured in thriving blooms. To pay a tribute to the Goddess, the towns avoid their fields and intensely ask in the woodlands of the towns and villages. No cultivating related exercises are directed that day.

Thus the tribal inhabitants of Chhattisgarh celebrate the Earth Festival with pomp and grandeur. Also known as the Surhul Festival or the Mati Puja, the festive celebrations commence in the beautiful and cheerful months of spring. During the months of March and April, nature is resplendent in its fresh bounty and the vibrant colors and new hopes and promises lift the spirits of the peasants and the yeomen. Surhul or Earth festival celebrations are completely segregated from harvest of crops. A religious festival in spirit, the festival is primarily concerned with worshiping the venerable Mother Earth and seeking her benison. The people eagerly and patiently await the auspicious day when the Sal trees are covered in flourishing blossoms. To pay a tribute to the Goddess, the villages stay away from their fields and fervently pray in the forests of the villages and hamlets. No farming related activities are conducted that day. it is part of Chhattisgarh sanskriti.

Mati Puja festival is celebrated with great excitement and enthusiasm in Bastar district of Chhattisgarh.

People worship the mother Earth on the occasion for getting blessed with ample yield of crops for the coming season.The festival holds the special importance in this region as people earn their living by farming and totally dependent on their crop yield every year.

During Mati Puja people worship the mother earth for getting blessed with yield of crops for the coming season. This festival is famous in this state, in this region because most of the people in this region earn their livelihood by farming and thus they seek the blessings of the earth god for a good harvest year.

The festival is marked by various rituals and rites to please the earth god.

The small sleepy town of Sheorinarayan is the venue of the Sheorinarayan Fair. Located in the Janjgir district of Chhattisgarh, Sheorinarayan is positioned at the confluence of three rivers. The Rivers Mahanadi, Sheonath and Jonk meet here. A temple in honor of Lord Rama dating back to the 13th century is to be seen here.

The conversion of temple premises into fair grounds is a fairly common trend in India. In keeping with this tradition, the Sheorinarayan temple hosts the Sheorinarayan fair. These kinds of fairs held in Chhattisgarh showcase the multihued culture of the land.

Description of the Sheorinarayan Fair in Chhattisgarh

A fresh lease of life is enthused into the town of Sheorinarayan at the time of this fair. There is cheerfulness in the atmosphere of this pilgrimage centre when the fair is held. Actually the Sheorinarayan Fair in Chhattisgarh is a wonderful occasion for the devotees of Lord Rama to come and visit the temple as well as be a part of this colorful and vibrant fiesta.

The followers of this legendary hero Ram offer their prayers at the Sheorinarayan temple. They have ample scope to move around and visit the various shops that are set up at the time of the fair. The shops house a variety of items. Drop in to any of the eating joints that are there and you will surely like the unique taste of these relatively low priced snacks. The fair ground bustles with a lot of activity and it is a treat to watch so many colorful people in such large numbers wandering about. The happy expressions on these bright faces who are so content with the little things of life give pleasure to the onlookers as well. The sights and sounds are very diverse.

Time for celebrating the Sheorinarayan Fair in Chhattisgarh

The Sheorinarayan Fair is held on Magh Purnima, which is the full moon day in the month of Magh. The date is fixed following the Hindu calendar but it more or less corresponds to the month of February in the Gregorian calendar.

The Kumbh Mela is one of the holiest gathering of pilgrims in the world. Most people know of Kumbha Mela and its four holy locations, but a secret is that there is a fifth Kumbh Mela. Rajim Kumbh Mela is popular gathering of Vaishnaviites, the followers of lord Vishnu. Rajim is located near the convergence of Mahanadi, Sondur and Pairi rivers. The Rajimalochana Temple is well known for being the venue of the Rajim Kumbh Mela.

Rajim Kumbh starts from Magh Purnima and continues for 15 days. Rajim Kumbh Mela in 2017 will start on 10 February and conclude on 24 February. There are hordes of religious preachers and saints from every nook and corner of country.

Rajim has been a holy pilgrimage site for Hindus for centuries. The small town of Rajim in Chhattisgarh, located on the banks of the Mahanadi River, is renowned because of its rich historical past and its varied cultural heritage. The Rajim Lochan Mahotsav is the biggest spiritual event and attracts a large number of visitors. In recent years, a lot of initiative has also been taken by the Ministry of Tourism in Chhattisgarh to organize the Rajim Kumbh Mela on a more impressive scale.

The Rajim Kumbha Mela is a visual treat. Holy pious saints, devotees and many colorful people gather at the same place for the divine festivities. This mela gives you a wonderful opportunity to witness the history, culture and attractions of Chhattisgarh.

Special puja is performed at 3.00 A.M. on the day that marks the beginning of Rajim Mela. Kuleshwar Mahadev and Shri Rajiv Lochan temples are visited by people and offerings are made. Devotees take a holy bath in Triveni Sangam. A ritual named ‘Kalash Yatra’ of rows of women bearing pitcher heads towards Mahanadi and from there they fill these pitchers and again carry them back to Mahadev temple.

Many cultural programs are a part of the celebration. The festival also hosts performances of the talented singers and dancers. Interesting dramas are also enacted by the local artistes. Many folk artistes of exceptional talent are a major attraction in these functions held on the occasion of Rajim Lochan Mahotsav.